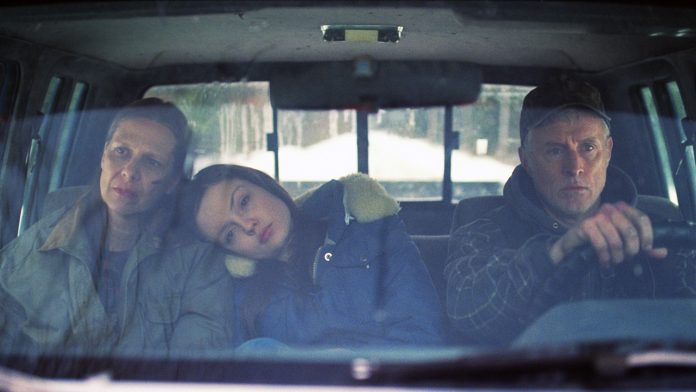 Bluebird, Lance Edmands’s directorial debut, is a slow burning examination of the ways in which grief and guilt affect the residents of a small town following a seemingly pointless and tragic event.

In the dead of winter, in a logging town in Maine, school bus driver Lesley (Amy Morton) is distracted from her nightly checks of the bus by a stray bluebird. Unbeknown to her, a young boy, Owen (Quinn Bard), has fallen asleep on one of the back seats. His neglectful party-girl mother Marla (Louisa Krasue) forgets that she was supposed to meet him at the bus stop since her mother (Margo Martindale), and primary caretaker of the boy, is unable to do so. He’s discovered the next morning having gone into hypothermic shock and fallen into a coma due to spending the night in the well-below freezing temperatures. He’s immediately rushed to hospital, but making a full recovery seems unlikely. Lesley is wracked with guilt, and her family, husband Richard (John Slattery) and teenage daughter Paula (Emily Meade) struggle to support her through her subsequent depression.

Bluebird has an oppressively sombre veneer but it fails to reach the depths it aims for. Despite being well-acted, the majority of the characters suffer from lazy stereotyping and they never manage to say anything especially poignant about the events of the film. This is especially true of Paula, who spends an unnecessary amount of screentime on banal coming-of-age fodder like losing her virginity and playing truant from high school. Lesley is naturally the stand-out character and Morton manages to portray her detached horror with skill. It’s easy to empathise with her sorrow and her shocked disbelief that she could have made what should have been an inconsequential mistake. Marla is surprisingly the least obviously perturbed by her son’s condition, seeing it more as an opportunity to make some quick cash by suing Lesley than a catalyst for some serious self-reflection and personal growth.

Although it’s riddled with cliches, the film does manage to generate some real atmosphere. The town itself is ominous in a way that only small towns where everyone knows everyone can be. Lingering shots of the paper mill that employs so many of the town’s residents convey the monotony and predictability of life there, and muted colours and near constant snowfall make for a quietly depressing backdrop for the drama to unfold. It’s a pity Bluebird never quite manages to provide the real emotional payoff that it’s seemingly working towards, but it’s still an interesting portrait of loss and guilt.

Bluebird will be available to rent and buy in the UK from Monday 25th July.

Jon Hamm, John Slattery & many more on Confess, Fletch and the allure of this timeless creation