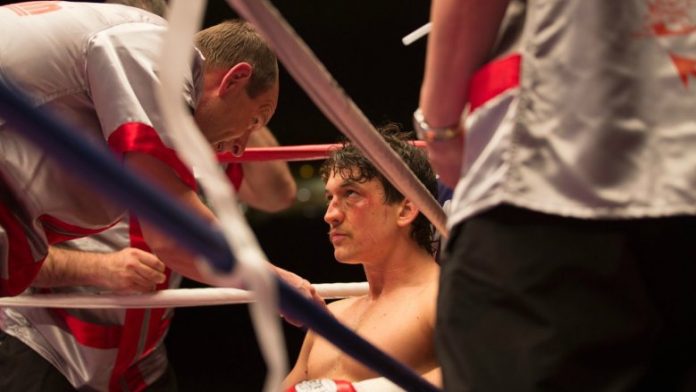 Boxing films thrives in the notion of the underdog, which the seminal Rocky production kickstarted, and one that has since been perpetuated across the last few decades, recently resulting in features such as Creed and Southpaw. The aforementioned endeavours are affectionately overstated, and overtly cinematic, and crucially, they’re fictional. Which is why Ben Younger’s Bleed For This stands out from the crowd, following the tried, tested and triumphant formula that so often illuminates the silver screen – except one that is based entirely on real events.

It’s the story of Vinny Pazienza, brought to life with a remarkable conviction by Miles Teller, a boxer who enjoys the high life, gambling until the early hours of the morning, albeit under the watchful eye of father Angelo (Ciaran Hinds). Hoping not to squander the natural ability the youngster possesses, Mike Tyson’s former trainer Kevin Rooney (Aaron Eckhart) is hired, and the results are immediate, when Pazienza wins the Junior Middleweight wold title – but before he’s had time to truly allow it to settle in, he’s involved in a near fatal car crash which damages his neck and spine. Doctors are adamant he’ll never fight again, as he’s subject to six months with a medical device called a Halo – but as soon as the time passes, Pazienza is determined to get back into the ring, on the road to one of the sport’s most miraculous ever comebacks.

As a sport, boxing makes for such ineffably inspiring cinema, as one that can be won in a split second, irrespective of what the tide of the fight. For you can be down and out, up against the ropes with no hope of victory, and then one punch could win you the fight. This works as a metaphor for the protagonist, seemingly a lost cause, who vies tirelessly and shows unspeakable determination to triumph in the face of adversity which makes for such compelling cinema. The film is not generically executed either, with a resourceful means of storytelling, as a feature creatively put together. It’s not quite Raging Bull, but enough to see Martin Scorsese’s name crop up in the closing credits as executive producer and not have it be a surprise.

The performances are strong too, with Hinds showing off his impressive aptitude for versatility, almost unrecognisable as the lead’s father. But this film is all about Teller, who, and not for the first time, has embodied a character who simply doesn’t know when it’s time to give up, a character he’s really bloody good at portraying.