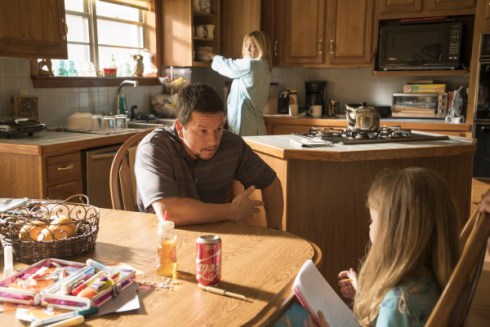 In April 2010, the very worst oil spill in American history occurred following the explosion of an offshore drilling rig. Blockbuster helmer Peter Berg has used the aforementioned set of events to lay the foundations for his latest endeavour Deepwater Horizon to thrive on, dramatising the tragedy in a way that is overtly cinematic, and yet rarely contrived, as the filmmaker’s most accomplished production for a good long while.

Mark Wahlberg plays Mike Williams, who plays an electrical technician stationed on the Deepwater Horizon oil rig, where he’ll be for a few weeks. Having bid farewell to his wife (Kate Hudson) and young daughter, he meets up with colleague Andrea Fleytas (Gina Rodriguez) and his boss Mr. Jimmy (Kurt Russell) to embark on their latest job, but upon their arrival they sense things aren’t right, with the BP executive (John Malkovich) incensed on cutting corners to save money – but his irresponsible approach leads to fateful consequences, when the rig is set alight following a burst pipe, and the lives of all employees aboard are put in severe danger.

Deepwater Horizon excels in its opening act, with a remarkably well-paced tale, that features a deliberately long, slow-burning set-up that thrives in the mundane, lingering over seemingly innocuous conversations between Mike and his family, and with his colleagues. The aim is to portray normality ahead of the disaster that strikes, revelling in the trivialities of everyday life, while Berg casually injects reminders that things aren’t as they should be, adding a vital foreboding element to proceedings, as we anticipate the forthcoming catastrophe.

What helps matter tremendously is having Wahlberg in the leading role, as an actor who demands the engagement of the viewer, who can carry a film of this magnitude so effortlessly, as someone you put your faith in as a hero, and yet one who remains relatable, which is the perfect combination. Naturally, Malkovich impresses, stealing the show in every scene he features with a distinctly sinister display, with a callous, unsettling glint in his eyes, as he represents the chief antagonist of the piece, as a film that isn’t afraid to point the finger at BP for this disaster. The actor dons a shirt bearing their logo for the film’s entirely, constantly reminding the viewer of who to blame for this incident.

After the events unfolded in real life, the situation grew incredibly political, and the news became all about BP’s culpability, and the court cases that ensued. Berg, however, is focusing on something far more important; the 11 men who lost their life. Deepwater Horizon is a film about them, and for them, which is exactly as it should be.