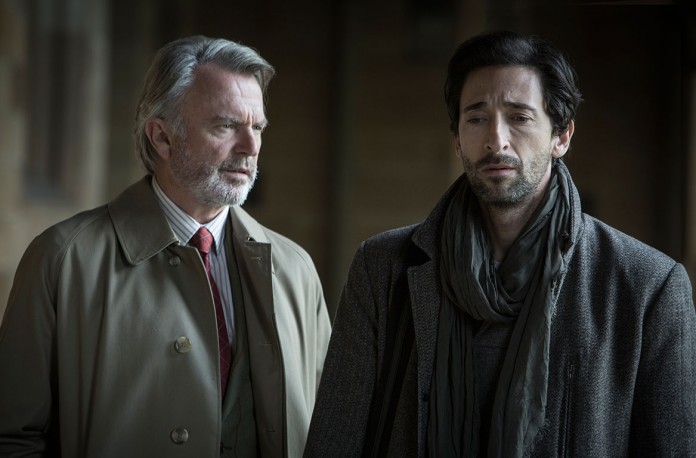 The last time an Australian horror movie used the protagonist’s fragile psychological condition, and volatile state of mind to evoke fear in the viewer, we were treated to the remarkable production The Babadook. Though Michael Petroni’s Backtrack takes a similar approach, displaying grief in such a way that the sense of disorientation and mistrust is used as a means of displaying tropes and devices of the horror genre, this is a far less subtle, and all too convoluted endeavour.

Adrien Brody plays the troubled lead role, the psychologist Peter Bower. Though his job is to ensure others maintain a clear head and calm peace of mind, internally he’s suffering greatly, as he struggles to overcome the recent death of his daughter, who was involved in a road accident. Eventually he begins to think that all of his patients are ghosts, and while his colleague Duncan Stewart (Sam Neill) tells him it’s a mere side-effect of the grief, he becomes embroiled in the land of the undead, linking back these appearances to a tragic train accident which occurred in the neighbourhood when he was a teenager, as he teams up with local law enforcer Barbara Henning (Robin McLeavy) to try and make sense of this surrealist set of events.

Petroni’s feature begins as an intimate study of this one man’s mindset, and works well as a psychophysical thriller – but the narrative becomes too complex, and the execution all too unsubtle. We see too much, especially in regards to the superfluous flashbacks, and perhaps the filmmaker could have more faith in Brody, that his nuanced display would be enough to illustrate the agony he feels, that we can get a sense for his pain through his eyes – we don’t need it visualised for us so often.

Peter Bower remains a fascinating entry point into this world nonetheless, as somebody so unreliable, that we’re never sure if what we’re seeing is authentic, or just a result of his intense grief, similarly, in that regard, to The Babadook. By placing a psychologist as the lead too, it brings about a vulnerability, as it’s his job to make sure others feel secure in their own mind, so his anxiety is even more prominent, as if he can’t sort himself out, then who can?

Regrettably, the supporting roles are not quite up to task, with a handful of mediocre performances orbiting around the accomplished Brody – but the film’s great shortcomings come in the narrative, and in how we deviate so carelessly from intimacy, with a final act that simply attempts too much. When candidly studying this man there’s an emotional core to the film, but it gets lost amidst the twists and turns, making for a wholly unfulfilling finale.