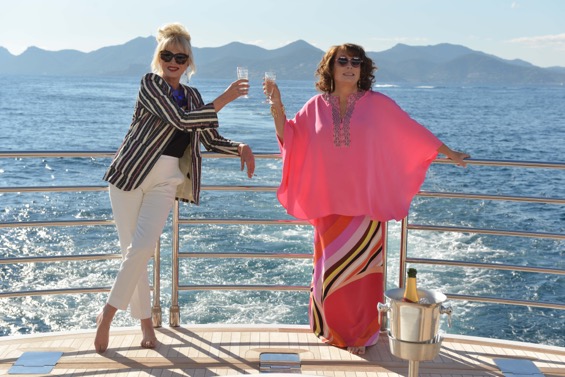 Twenty-six years after a nascent role-reversal French and Saunders sketch aired on the BBC those 90s chuggernauts Edina and Patsy, the Ab Fab duo, are heading towards the big screen. As Zoolander 2 recently proved the world parodied in the Beeb sitcom has now come to pass in garish fashion, so the time is ripe to jump back on board the bolly boat.

Jennifer Saunders and Joanna Lumley are back as the Absolutely Fabulous Edina and Patsy, along with Julia Sawalha as Saffy, Jane Horrocks as Bubble and June Whitfield. Series regulars Mandie Fletcher and Jon Plowman are behind the film as director and producer and with a suitably silly synopsis (see below) it’ll be interesting to see if Saunders and Co. manage to avoid the perils of the big screen sitcom.

The film is out on the 1st of July, time enough to grab a bottle of something and fill your kinky boots. Here’s your teaser,

Appropriate for their big screen debut, Edina and Patsy are still oozing glitz and glamour, living the high life they are accustomed to; shopping, drinking and clubbing their way around London’s trendiest hotspots.

Blamed for a major incident at an uber fashionable launch party, they become entangled in a media storm and are relentlessly pursued by the paparazzi. Fleeing penniless to the glamorous playground of the super-rich, the French Riviera, they hatch a plan to make their escape permanent and live the high life forevermore!