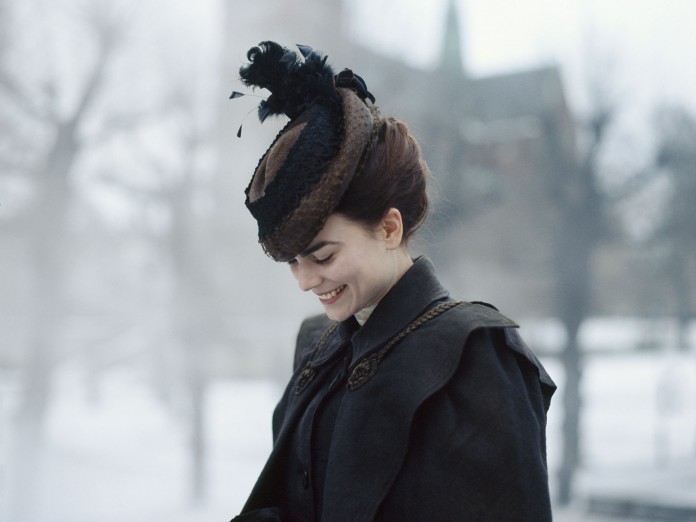 When first introduced to Karin Franz Korlof’s Lydia Stille in Pernilla August’s sophomore feature film A Serious Game, she is seen swimming naked, both serene and playful, as we adopt the very same first impression of the young woman that budding journalist Arvid (Sverrir Gudnason) has of what can only be described as a beguiling presence. It’s vital this be the case, as we eventually embody the latter, so to sexualise and make a fantasy out of his love interest allows for us to appreciate his desires – while it’s an important facet to her personality that we see abandoned as we progress throughout this pensive period drama.

Set at the turn of the 20th century in Stockholm, Arvid falls hopelessly in love with the artist, but given his financial woes, conceives he may not be a tempting proposition for her hand in marriage. His fears are confirmed when Lydia marries the affluent, middle-aged bachelor Roslin (Sven Nordin) instead. Romantically disenchanted, Arvid settles for the congenial Dagmar (Liv Mjones), struggling to appreciate the beauty to his new partner given he’s so preoccupied with the one that got away. But then, when their paths cross a few years down the line, having both had children in their respective marriages, they reignite the flame and enter in to a sordid affair, promising only to meet tragic, undesirable consequences.

August has depicted a tale that creates such an internal conflict within the viewer, as we cannot decide who to root for romantically. Dagmar is an endearing, well-intentioned woman who has so much love to give to her husband, but given the film begins almost under the guise of a ‘will they/won’t they’ drama, we have a vested interest in the coming together of Lydia and Arvid, having initially wished, so fervently, for them to be a couple.

In that regard the film bears similarities to the Oscar nominated Brooklyn, as we’re torn in our ambitions for the protagonist. Another Academy Award nominated production A Serious Game can be likened to is Carol, in how August just allows the camera to linger, just for that second longer, on every single touch, or glance between the pair. It makes for a wholly enchanting piece – albeit somewhat dark and upsetting in parts (it is Scandinavian cinema, after all) – enhanced by the accomplished and indelible Matti Bye score.

Though perhaps on the lengthy side, complete with a tedious middle act, A Serious Game remains a worthy piece of cinema, and given August has worked so closely in her career as an actress with filmmakers such as Bille August and Ingmar Bergman (not to mention her role as Shmi Skywalker in the Star Wars prequels), it’s safe to say that she has taken notes from such collaborations, and has put such experiences into practise, because this is a fine offering.