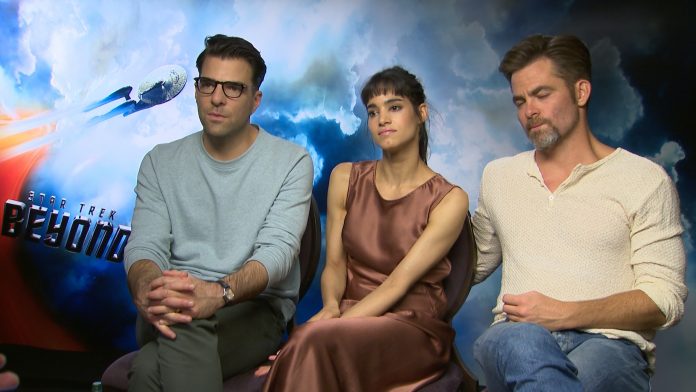 If there is one thing that comes across so well on screen in the Star Trek rebooted series, is the camaraderie of the Enterprise crew, which is essential in ensuring the audience’s investment in the tale. If you ever wanted to see an example of that togetherness the actors feel off-camera, then watch our on-camera interview with Zachary Quinto, Sofia Boutella and Chris Pine, who can’t seem to keep their hands off one another.

Quinto reprises his role as Spock, while Pine returns as Kirk – and newcomer Boutella joins the collective as Jaylah.

Quinto has worked closely across the past few years with the original Spock Leonard Nimroy (who played Spock Prime in the rebooted franchise) and we discussed what it was like collaborating with such a talent, and why the emotionally charged scenes in the latest film required very little acting from the actor. You can watch his thoughts below.

Star Trek Beyond is released on July 22nd, and you can read our review here.

Prisoners of the Ghostland Review – Sundance 2021