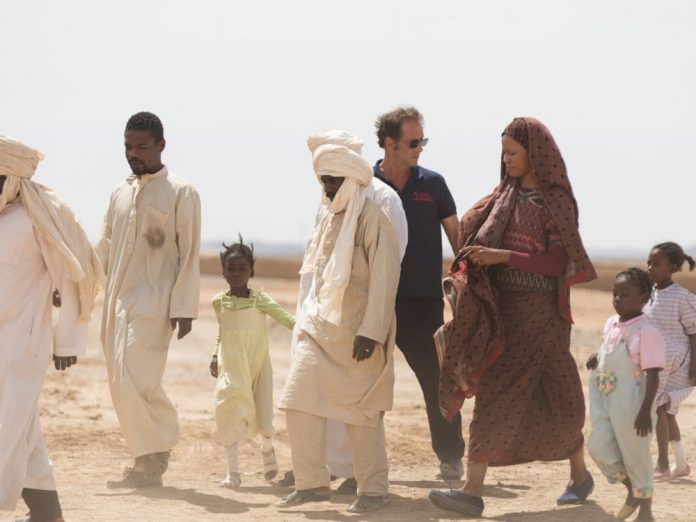 During a weekend in Paris last winter, HeyUGuys were fortunate enough to speak to Vincent Lindon and Louise Bourgoin, who take on the leading roles in Joachim Lafosse’s The White Knights, a harrowing tale depicting the real life events concerning charity Zoe’s Ark in 2007 – whereby a handful of employees attempted to abduct and fly over one hundred children out of Chad, to parents wanting to adopt back in France.

The film plays heavily on our moral compass, for the charity workers believe they are doing the right thing, taking infants away from a poverty stricken nation to a more stable life, but in doing so, are snatching these youngsters away from their families – despite claiming they were dealing strictly with orphans.

Vincent Lindon, who plays the leader of the endeavour, Jacques Arnault, explained that it was the filmmaker’s inclination to remain impartial that inspired him to getting involved in this indelible drama.

“The movie doesn’t say this guy is good and I’m going to tell you why, or, he’s bad and let’s explain why, no – it’s a story and the director tries to stay away from the answer and leaves space for freedom, so we can make our own decision on what we think,” he explained.

“If a movie tells you what to think it makes me very angry, I hate that. Let me think what I want to think, just show me the facts and I’m going to decide if I’m on the right side or left side, if I’m with him or not with him. If I were him, what would I do? That’s what is interesting in a movie, that’s why I like to make cinema, to let people react as they want.”

It’s a role that Lindon felt it was important not to judge, and he explained to us what the appeal was in portraying this particular role – and why he felt it was so important to not actually meet the real life man the character is based upon.

“He falls in love with the idea of watching himself do good things, like in love stories, you think you’re in love but in fact you’re in love with the idea of yourself falling in love, which is terrible,” he said. “In the old days if you were narcissistic, you’d be like that in the mirror, with your family at dinner, but now with technology, with the internet, a narcissistic can be narcissistic all around the world. But he forgets the question, he is only thinking about his answer, which is interesting. You are with him, and after half an hour you think no, he’s fucking crazy. Then you think, he’s crazy but he’s courageous. Then you leave him again and think, no no no that’s too much – and that’s important.”

“But I didn’t want to meet the guy in real life. Because if I meet him it proves I am not him. My job is to be him, so don’t show me him. For me, he’s not real, I’m real, because I’m doing the role. If I see him and realise he’s real, then I might as well say to the director, take him, not me. It’s my way of working. I’m not saying it’s the right way, it’s just my way. People say to me it makes it more true to meet them, okay. So do that with everything. When you cut your finger in a movie, cut it for real. Oh the finger you don’t cut? Okay. So you choose what is real and what’s not real – no.”

Naturally without meeting the man, we were intrigued as to how Lindon went about preparing for this part, and while the impassioned (and endearingly grumpy) actor speaks candidly about his relationship with cinema – he refused to answer this particular question, and gave us three reasons why.

“I don’t say how I prepare for my role, for three reasons ” he began. “Firstly, it’s boring for people – they don’t care. Second, my idea of cinema is to have stars. Clarke Gable, Gary Cooper, Jean Gabin – they didn’t explain how they prepared for their roles. It goes against cinema for me, and my idea of cinema. Thirdly, I don’t want to explain how I work because I don’t want to hear myself explain it, because I don’t remember it. If I remember how I work I think it will go away. I want to keep it, and the best way to keep emotions and secrets, is not to say it to everybody. Even if you say it alone in your room, and you are the only one who knows it, just saying it means it’s not a secret anymore, because you’ve said it out loud. I don’t want to hear myself say how I work, I think I might lose something.”

Meanwhile Bourgoin, who plays Laura Turine – a fellow member of the organisation, and one of the most determined to see this endeavour through, also discusses Lafosse’s vital sense of impartiality concerning the subject matter, and how her own thoughts on the situation have changed now she’s taken part in this project.

“It was a big scandal in France,” she started. “But things were not clear in my mind then. At the time I was a lot less sceptical about what they did and I thought their punishment was really extreme. But now my opinion has changed because I realised they lied a lot. I was also shocked when watching documentary footage of my character selecting children, those under five. Some she considered maybe a bit weak in the head that she wouldn’t take, it shocked me. They had good intentions, but also very locked up in their own certainty, believing they have the solution. They don’t have a perception of what the concept of family is.”

“So this is what I like about the films of Joachim Lafosse, he has the right distance, he doesn’t tell us what to think. He forces us to take a position that’s really interesting. He plays with us as spectators, because we tend to empathise with characters. We’re used to wanting an endeavour where we want the characters to succeed, but in the end, we almost do feel this way, even though it’s not good, so there’s that interplay between our objectivity and our childlike quality of seeing this thing succeed.”

It’s a fascinating, nuanced role for Bourgoin to undertake, and the actress, who was heavily pregnant at the time the interview took place, explained that it’s roles such as this why she wants to remain predominantly in France, and not chase characters in the States.

“I don’t have a fantasy about American cinema, because they have so many actors they don’t really need to bring in actors from around the world. Often if there is a role for a French actress it’s a small role in a blockbuster for promotion purposes, to sell the movie better in every territory. There are so few important, leading roles for women in American movies, I prefer to concentrate on my career in France.”

So while evidently inspired by the part at hand, she does admit that what the viewer sees is somewhat different to the original screenplay she had received, citing the filmmaker’s freedom to be spontaneous on set.

“The film you see is very different from the script because Joachim gave us a lot of freedom. Plus, Vincent likes to bring a lot of things into the script and Joachim let him do that because Vincent is a leader, which is a reflection of his character.”

Calling Lindon a leader seems somewhat apt, for the actor we encountered seemed just that – not afraid to speak his mind, and demanding the attention of all in the room – and if anything, he actively promotes such a culture amongst actors, believing that artists in the public eye should use their fame as a platform to help change the world.

“I get sad when I see artists are not involved in the history of their own country, I want to say to them, you have a microphone – speak. Say something. Then there are artists I really appreciate and admire because they try to do something. That’s our job. Not always, but sometimes.”

Such an attitude derives from the actor’s appreciation for his craft, speaking so fervently about the importance of art.

“Art is the only thing that’s going to stay. Picasso, Shakespeare. My child knows all the Pink Floyd and Beatles songs. They see all the Lubitsch movies. Culture is the only thing left. It’s crazy when the country doesn’t want to put money into culture, because the rest is going to disappear. You don’t go in your grave with your money. But if you give a cultural education to your children, it’s a real heritage. That’s why I’m trying to be an artist, because it’s the only way to be really free. An artist is allowed to say what he wants, when he wants. Why? I don’t know. But it’s like that.”

Lindon is sure to seperate his work from his personal life, however, for when quizzed on how great a year it had been for him – having won the Best Actor award in Cannes in 2015 for his performance in Measure of a Man – he was quick to point out that following the tragic terrorist attacks in Paris, it was impossible to cite the year as being a successful one.

“In my cinema life it’s been a good couple of years. In my private life I’ve had the same year as all the French people. So it’s difficult to say it’s been a good year, it’s quite impolite,” he finished. “There are two lives, my cinema life, and my own private life. This year I seperate them. The prize in Cannes and what happened in Paris, I am obliged to seperate. I can’t say to somebody it was a good year, it’s impossible. It was only a good year for me in cinema.”

The White Knights is released on November 4th. You can read our 4* review of the film here.