Home Reviews Where to Inva... 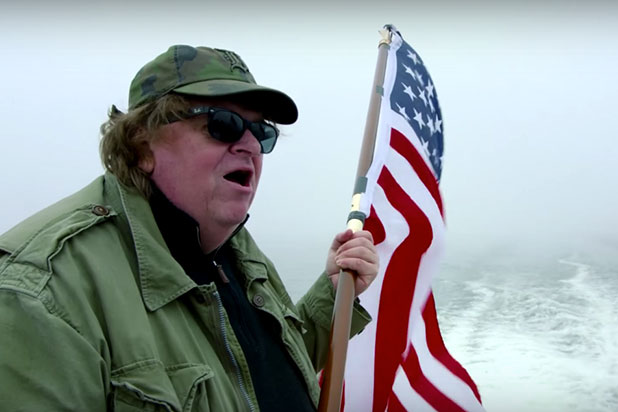 There may not be a more controversial filmmaker in the world than Michael Moore.  The politically-minded documentarian has plenty of detractors, thanks to a slew of anti-establishment films that satirically poke holes in the concept of American exceptionalism. He’s covered gun control (Bowling For Columbine), the fractured health care system (Sicko), and the war on terror (Fahrenheit 9/11), all while gleefully taking aim at the do-nothing installation of politicians that populate the halls of Congress and the White House. With his new film, Where To Invade Next, Moore delivers his broadest and most eye-opening film yet.

The film opens with Moore being called to Washington by the executive branch of the U.S. military, to offer up his choice of which country to invade next (hence the title).  So Moore jets off to several foreign locales to assess their way of life and whether or not they’re “invade-worthy”.  His travels take him everywhere from France, to Norway, Finland, Portugal, and beyond.  Along the way he learns of some of the interesting ways in which these countries make efforts to improve their way of life, and of course, to plant the American flag once he believes these ideas could be useful in the Land of the Free.

There is no doubt that a large swath of viewers will take issue with this film, because there are a great many American citizens who feel that Europe and other foreign nations are too radical in their approach to culture.  But, Moore doesn’t really seem to care.  He begins his journey in Italy, where he discovers something truly revolutionary – the employees are happy.  He learns that most executives for Italian companies have no problem allowing their employees to take up to seven weeks of paid vacation a year. In the states, there is no law requiring companies to offer any vacation time to their employees.  He also learns that Italian women get five months of paid maternity leave, a far cry from the handful of weeks an American mother would receive. The difference is astounding, and when Moore reveals this to an Italian couple he’s interviewing, they are literally speechless.  While this alone would be an interesting topic to explore further, it’s only the first in a series of revolutionary ideas that Moore uncovers.

In Finland, where students are considered the most educated in the world, Moore learns that the students only go to school for 20 hours a week and are rarely assigned homework. They also don’t institute the arcane notion of standardised testing – an oft-maligned American practice that rarely works and adds puts even more pressure on students and teachers.  In Germany, he finds the most serene and effective prison system in the world – one which embraces the idea of reform and lowers the rate of recidivism.  He also finds that schools in the country spend a lot of time remembering the atrocities of the Hitler regime and honouring those who lost their lives. Whereas in the States, there’s a targeted effort to remove the topic of slavery from history curriculums. In France, he discovers that students are served healthy and well-planned school lunches, with a dietitian and chef working in tandem to ensure a schedule of balanced meals. In Portugal, the decriminalisation of drugs has lowered the crime rate and the overpopulation of prisons. In Norway, the maximum prison sentence is 21 years, and capital punishment is constitutionally prohibited. In Iceland, women have rebuilt a struggling economy (destroyed by men) and brought the nation back from the brink of disaster. That’s just the tip of the iceberg.

The film never feels like some sort of unpatriotic, angry missive against America’s inability to evolve as the rest of the world seems to have done.  In fact, the sample size is quite small, all things considered.  Every country has its own set of problems, and Moore seems to be fine with only highlighting the things that are working. This gets incredibly frustrating at times, because of course, if you take one or two aspects of several different countries and put them all together, you’ll have a Utopia where the economy is thriving, kids are learning, and the people are happy. As an American citizen, Moore waxes poetic on the virtue of change, but at times, you wonder if he’d be better off living elsewhere.

Now, that’s not to say this movie is bad.  Learning about the way any unfamiliar country lives is always an eye-opening experience, and it is the people within Moore’s film that really make the experience pleasing. The folks who really resonate are the educators in Finland who take great pride in their work and how they teach children to be successful.  Their message is clear: let children be happy and they can be whatever they want to be. When Moore asks them to speak directly, they don’t pat themselves on the back and congratulate each other for a job well done. They simply speak to the philosophy that inspired them to be teachers in the first place. They want to see growth and change.  They want to see children playing.  They want these kids to want to learn.  It’s very touching, and proves to be one of the more poignant segments of Moore’s film.

Like his previous works, Moore doesn’t seem too keen on relenting from the opportunity to highlight hypocrisy.  It’s important that people do.  It’s the same reason that Americans (myself included) looked up to people like Jon Stewart or Stephen Colbert, because change only comes when somebody calls bullshit.  At this point, after several films that take aim at virtually everybody, it will be hard for anybody to watch one of Moore’s films and call it important.  Instead, it will be labeled as subversive liberal babble.  But, with Where to Invade Next, even if you remove Moore from it, you could learn a thing or two about the world, and that’s never a bad thing.