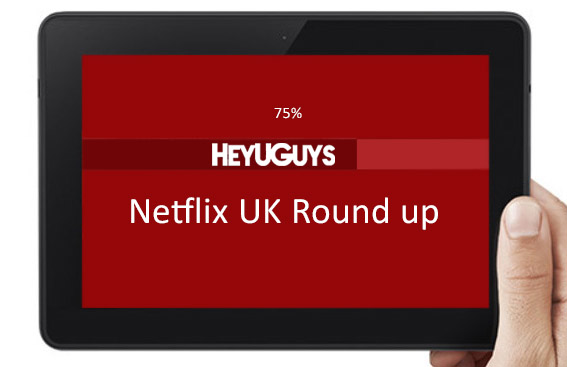 Welcome to our regular post which delves into the Netflix goody bag to bring you a selection of some the    tastiest content available.

Pick of the new releases

A big hit at Sundance, Short Term 12‘s debut director Destin Daniel Cretton crafts an intimate and highly moving tale, bolstered further still by a powerful, superlative performance from up-and-coming star Brie Larson. She plays Grace, a twentysomething supervisor at a foster care facility. It’s a mainly relaxed environment where the kids are free to leave at any time and employees can’t physically touch or restrain them outside of the grounds. Grace is passionate about role and she brings a dedication to her position, sometimes at the cost of engaging in her life outside of work with boyfriend and fellow employee, Mason (John Gallagher Jr.). Together, the pair strive to help Marcus (Keith Stanfield), an intense and wounded resident on the cusp of adulthood, but it’s the new girl Jaden (Kaitlyn Dever) and her issues which open old wounds for Grace.

Short Term 12 has an easy charm and thoughtfulness which brings to mind the nuanced, quietly engaging indie features which flourished in the nineties. Throughout, Cretton adopts a vérité style which chimes near-perfectly with the material at hand. Larson is able to bring out a tender fragility underneath Grace’s tough exterior, as the character’s own demons spur her on to protect those in need. Having lent her talents as the kooky bit-part player in a number of indie and mainstream American comedies (Scott Pilgrim vs. The World, 21 Jump Street), the actress is something of a revelation here, and the film undoubtedly marks her out as a major talent. Despite the sometimes sobering subject matter, Short Term 12 bristles with optimism and hope, and it’s hard not to be moved by this.

For those who have yet to embrace world cinema, cast aside your misplaced aversion to subtitles and dive into the rich assorting of foreign language films available to stream.

We Are The Best

Cracking little coming-of-age tale of teenage non-conformity. Director Lucas Moodysson’s touching depiction of three young girls who create a punk band as a response to the unhappiness of growing up in early 80s Stockholm is a similarly poignant and bittersweet affair to that of his much-loved 2000 feature Together. The director gets lovely grounded performances from his protagonists, and if you’re not pumping your fists in the air as the end credits kick in, you ain’t human.

Best bit: The trio performing a song about their intense dislike for the older rock group they’re completing against in a painfully underrepresented battle of the bands competition.

The very best cinematic offering from last year (and this decade, for that matter) is now available to stream. An ageing world-weary writer mixes with the elite of Rome society as he laments his past and the one true love whom he let escape. Director Paolo Sorrentino offers the kind of ridiculously heady and luminous cinematic experience you wish would allow you to step right into the screen itself. Prepare to be spellbound.

Best bit: The massively decadent and seemingly endless rooftop party towards the beginning of the film.

False Trail is a very watchable additional to the burgeoning ‘Nordnoir’ sub-genre, but what elevates the material above your standard potboiler is a fine performance from Hollywood character actor Peter Stormare (back on home turf here) and the stunning Swedish locations used. This dark little thriller will appeal to fans of The Killing, and while it may not pack the same visual punch as The Girl with the Dragon Tattoo series, there’s much to admire here.

Best bit: The nerve-shredding final shootout which tips into First Blood territory in the mountainous woodlands.

Wedged in between Icelandic filmmaker Baltasar Kormákur’s two English-language, action-driven popcorn flicks (2012’s Contraband and 2013’s 2 Guns) The Deep sees the roving director back on home soil for a downbeat yet thoroughly engrossing tale about an incredible true-life tale of survival at sea. The film is about as far removed from Kormákur’s glossy, disposable State-side fare as you can get, and is all the better because of that.

Best bit: When the lead character’s extraordinary resilience to sub-zero temperatures is revealed.

From the dazzling and inventive Hong Kong filmmaker Stephen Chow, Shaolin Soccer is one of the maddest and most entertaining genre mash-ups you’ll ever see. The world of martial arts and football gloriously collide when a former Shaolin monk and his five brothers put together a formidable footaball team to play in an open cup competition. Think When Saturday Comes mixed with classic era Jackie Chan choreography and topped with a Michel Gondry sensibility and you’re almost there.

Best bit: The final match where Chow goes for broke visually and throws everything into mix, no matter how outrageous or surreal.

Populaire – Sumptuous French homage to the era of those chirpy Doris Day and Rock Hudson rom-coms.

The Secret in Their Eyes – Catch this acclaimed Argentinean thriller before the US Nicole Kidman-headlining remake arrives.

Y Tu Mama Tabien – One of cinema’s greatest rite-of-passage tales from the director of Gravity.

This US satirical sketch show has its few fervent fans over here in the UK, but it deserves a much wider audience. Taking a delicious swipe at hipster culture in Portland, Oregon, series leads (musician Carrie Brownstein and former Saturday Night Live cast member Fred Armisen) are a fantastic duo who are aided and abetted by a huge list of cool cameo turns from the likes of Chloe Sevigny, Steve Buscemi, Aubrey Plaza, Jason Sudeikis, Gus Van Sant, and Jack White (to name but a small few). Cease stroking your Victorian era beard, put down your overpriced, organically-sourced coffee and stream this programme, post-haste.

Best bit: An hilarious, on-the-money skit, where Browstein and Armisen inquire exactly where the chicken dish they’re ordering in a restaurant has come from.

See Chevy Chase at his big-screen comedy prime on the 80s before he became an insufferable grouch. Fletch is something of a cult classic, allowing Chase to flex his considerable comedic muscles as a maverick undercover newspaper reporter Irwin M. Fletcher who finds himself unexpectedly drawn into a premeditated murder plot. With an ace electronic score by Beverly Hills Cop composer Harold Faltermeyer, Fletch is worthy of a place amongst the classic comedic offerings from that decade.

Captain American fights his inner demons instead of Hydra in this absorbing law drama which features a stunning central performance from the aforementioned first Avenger, Chris Evans. He plays a young hotshot lawyer nursing a drug addiction who agrees to take on a mentally-punishing pharmaceutical case with his partner. Having first appeared on these shores under the more intriguingly titled Puncture, don’t let the rather unimaginative name change put you off – this is a powerful and thought-provoking film.

Best bit: Evans, deeply into the case (and his habit) lambasting his partner during a private meeting.

While his name may not been immediately recognisable to a UK audience, stand-up star Aziz Ansari has been slowing building up a healthy following over in his home country (he plays lackadaisical government official Tom Haverford on hit TV show Parks and Recreation). Bringing his hilarious brand of jittery observational comedy to a London audience when he plays the Hammersmith Apollo later this month, here’s the opportunity to see him firing on all cylinders during his major US tour of last year.

Best bit: The section where Ansari imagines a world where marriage doesn’t exist but a man still asks a woman to be his partner for life. Priceless.