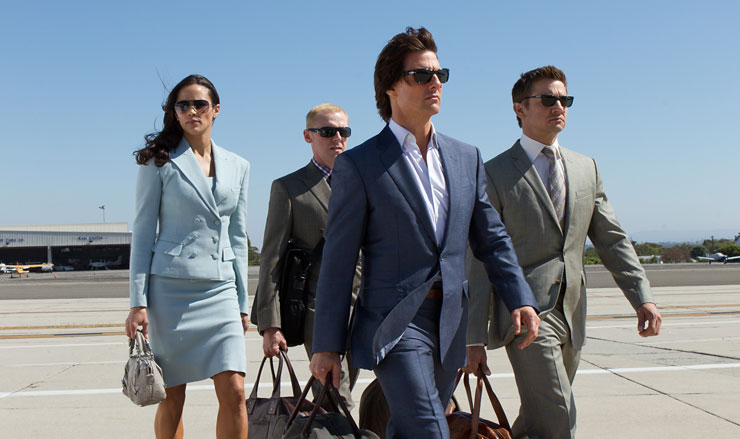 Only those of you with happy memories of the fun that was had NINETEEN YEARS AGO when Mission: Impossible came out will get the headline.

Back when Thinking Machine laptops and 686 prototypes with an artificial intelligence RISC chip were the future and tv shows moved to our cinemas and not the other way round Mission: Impossible set the bar for espionage hi jinx.

Yes, we were in the post-Goldeneye world but Tom Cruise and Friends had Brian De Palma on their side and by gosh and darn it if this wasn’t (and still is) one of the best examples of the genre to date. A Woo-handled sequel confused people with flapping doves and long hair, a third film saw a fine turn from the late Philip Seymour Hoffman in a genuine bad guy role.

The recent fourth instalment introduced some new members into the gang and had some ridiculously over the top set pieces but for my money what I enjoyed most about the series is each new film is taken on by a director whose hands you want to see over Tom Cruise’s Hunt. Christopher McQuarrie is taking over the fifth film and if you haven’t seen The Way of the Gun then a) you must, and b) you’ll not understand why he is perfect for the series.

News tonight has it, in a fun and unusual turn of events, a much anticipated, high-budget movie is actually coming out early. Five months earlier from the planned release date of the 18th of December (or STAR WARS day) to the 31st of July. Seems rather sensible to me. Alec Baldwin, Simon Burney and Rebecca Ferguson join Messrs. Pegg, Cruise, Rhames and Renner.

As for the plot – we know nothing. Could be about flamingos for all we know.

Simon Pegg confirms he will return to Mission: Impossible