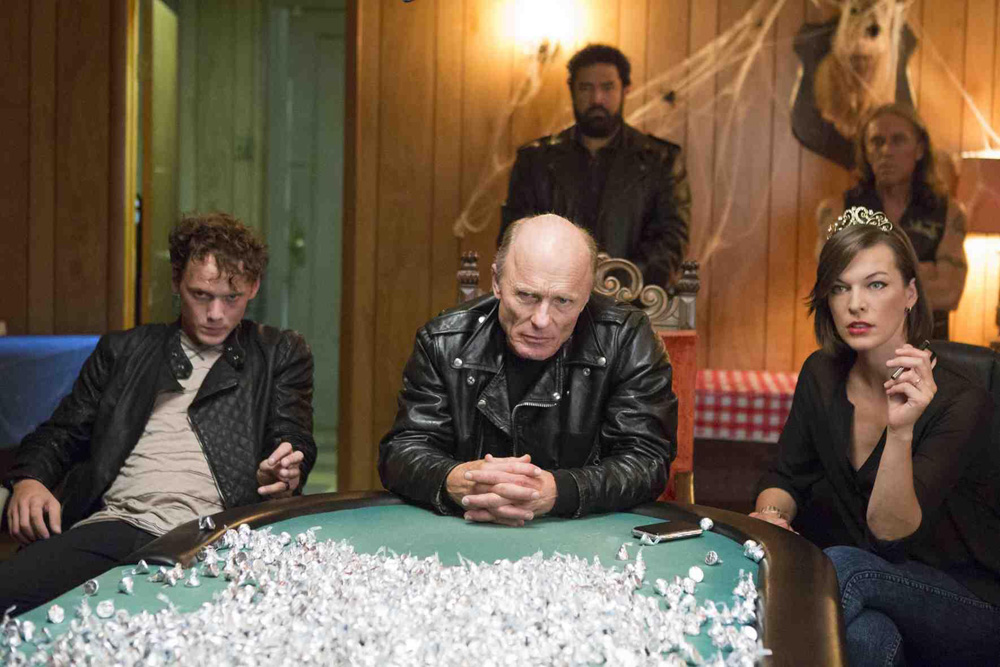 Michael Almereyda enjoyed critical acclaim with his rendition of Hamlet in 2000, starring Ethan Hawke as the troubled Dane. He arrives at Venice with one of the Bard’s “problem plays”, Cymbeline, which Almereyda has bravely, though ultimately unsuccessfully tackled with Hawke as one of the leads.

The tale is a complex weave of plots, counterplots, misunderstandings and violent subterfuge, which in the original play, takes place between England, Italy and Wales. Almereyda has transplanted the action to an unspecified US town and Cymbeline (Ed Harris), King of England, is now a biker gang leader who opposes the corrupt Rome police force. His conniving queen and second wife (Milla Jovovich) wants her son Cloten (Anton Yelchin) to marry Cymbeline’s daughter Imogen (Dakota Johnson), but she has secretly married Posthumus (Penn Badgley). When Cymbeline finds out, Posthumus is exiled and subsequently meets up with Iachimo (Hawke) who wagers that he can woo Imogen. Thus begins a tale of faked death, hidden identity and tested loyalty.

There is no problem with Shakespeare in a contemporary setting – if you don’t believe me, ask the RSC. The reasons for Shakespeare’s undiminished success lies in the fact that we can constantly reinvent and translate him, providing new contexts for historical works. And on the whole, the actors perform well, particularly Harris, who is a true regal presence, and Hawke, who positively relishes Shakespeare’s lines. Unfortunately, Jovovich has too little to do and Badgley is weak as the romantic lead. Other famous names such as Delroy Lindo and Bill Pullman seem at home with Shakespeare.

What doesn’t work is the back story: why make a king a gang leader? And why Rome a corrupt police department? All the majesty of Cymbeline dissolves and we have no sense of nobility or of two great powers battling it out. There’s nothing very regal about meth dealers and corrupt cops. Another issue I had was of seeing leathery-faced Harris in his leather gear showing up on a motorbike, but living in a house more reminiscent of a home seen in the Sopranos – the wild biker image and the gilt furniture just didn’t sit well together. Also, some of the humour came at Lindo’s expense: he plays Belarius, who was exiled by Cymbeline and took the king’s two sons with him. When Lindo reveals the white-skinned, blond princes’ true identity, and they look stunned at the news that Belarius was not their father, the audience laughed and all I could think of was Steve Martin in The Jerk. A cheap laugh that could have been avoided with more intelligent casting.

Yet for all the quibbles, Almereyda has managed to instil new life into a much forgotten play and he at least has taken brave directorial directions rather than being cowed by the problems the play poses. If nothing else, this film made me want to see more Shakespeare and if it has this effect on audiences, then Almereyda is to be commended.