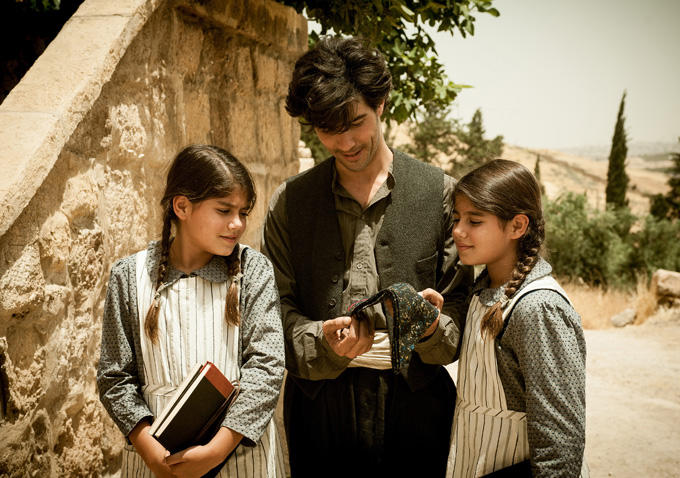 Fatih Akin blasted onto the public’s consciousness with the visceral Head-On in 2004. Since then he has consistently turned out high calibre films, from The Edge of Heaven to the more lighthearted Soul Kitchen and New York, I Love You. These films share themes of nationality, belonging and displacement. Akin takes these subjects to new levels in his look at the Armenian genocide in 1915, a term invented to describe the event although Turkey still refuses to accept it.

The eminently watchable Tahar Rahim is Nazaret Manoogian, an ironmonger from Mardin who lives a tranquil life with his wife, twin daughters and extended family. But the Ottomans are approaching and it is a question of time before they reach the town. The audience is given an inkling of what’s to come when Nazaret and the girls talk about a long journey the three of them will take across the ocean. Three? What about mum? Soon, Nazaret and all the able-bodied men are rounded up as slave labour while the women, the old and the children are sent on death marches. Nazaret escapes death but at the cost of his voice and so begins his mute odyssey to find his missing family. He’s told they are in one town, only to move on to another.

The story crosses borders and oceans as he meets Bedouins and barbers, hookers and railwaymen. His journey includes a refugee camp: leeched of colour it looks like Signorelli’s The Damned Cast Into Hell. Then he’s back on the road, saved by a soap manufacturer after countless vicissitudes. Safely in Aleppo our mute hero sees another silent hero: Charlie Chaplin in The Kid. Chaplin crops up again in poster form in Cuba. There is a real likeness between the two; Rahim’s curls and clothes recall Chaplin’s and they are both tramps desperately trying to find and care for their children but the comparison seems glib considering the events surrounding Nazaret’s story.

This is not the only problem. The film is a linguistic muddle. Nazaret and the Armenians speak English, but when Nazaret finally makes it to the USA he cannot understand the language. Why not dub the actors and have them speak Armenian? Or use Armenian actors? There is a constant use of one song and one story, which acts as a thread but seems to ignore the incredible richness of Armenian culture and language. And the film is just too long. When Nazaret reaches a destination, only to be told for the umpteenth time that the girls have moved on, there is a collective groan from the audience. But this also shows the breadth of the Armenian diaspora: there really were communities founded worldwide, from Havana to North Dakota.

This is a heartfelt film that depicts events cruelly omitted from the pages of our history books and Akin has put that partly to rights with this film. It could have been so much more – Far From Men springs to mind – but we should be grateful to Akin for putting Armenia back on the map.

Jodie Foster and Benedict Cumberbatch star in trailer for ‘The Mauritanian’