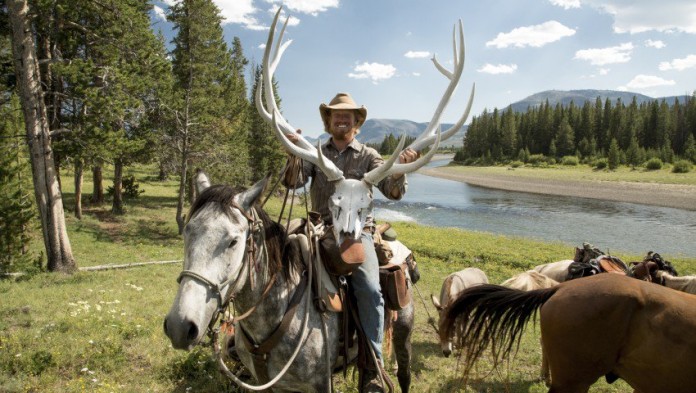 Four fresh-faced and enthusiastic cowboys set out to complete the journey of a lifetime. A 3000 mile long ride from the Mexican to the Canadian border, accompanied by 16 mustangs, through some of the most rugged, treacherous, and beautiful terrain known to man. The idea was conceived by native Texan and wildlife biology graduate Ben Masters, who hopes to raise awareness about the plight of the rapidly expanding population of wild horses in the American west and to encourage the adoption of the 50,000 mustangs and burros currently in captivity.

This social issue is the backbone of Unbranded, while the story of the four riders is punctuated by interviews with experts on both sides. It’s made clear that they could have used examples of over-zealous protesters, but the film is never blatantly biased. The commentary is balanced, intelligent and effective at framing the debate.

Meanwhile the cinematography is stunning, with sweeping panoramas of the landscapes sure to have even the most hardened ‘city-slickers’ packing their bags for a trip to America’s beautiful national parks. One of the most visually striking scenes, of Masters fly-fishing at sunset while a storm gathers behind him, is illustrative of everything his journey represents; working with nature whilst respecting, and occasionally fearing, its incredible power. There’s no shortage of heart-pounding moments either, as the riders carefully traverse a narrow pathway on the cliff faces of the Grand Canyon, highlighting the particularly harrowing and unpredictable elements of their journey, and ultimately, their fate. “If there’s a snake, or a loose rock, or a plastic bag, or anything… we’re all dead.”

The relationships in the film are compelling and drive the narrative forward in a natural way. The bond between the mustangs and the four men is genuine and at times truly tender. One man spends 27 hours tracking down a horse that bolted, and another spends days plucking cactus spines from a horse’s body, despite taking a hard kick for his trouble. By far the most emotive character is Val Geissler, an experienced mustang trainer who acts as both guide and surrogate father to the group. Geissler reveals the story of a past tragedy and his relationship with the men is instantly understandable.

The weakest areas of the documentary are undoubtedly the scenes that deviate from the core story. At one point the group go into a town for the fourth of July, where they get drunk, ride bulls, and play pool. It completely changes the tone of the film and takes you out of the ‘wild west’ experience, though that isn’t to say that some of the modern touches aren’t fascinating (seeing cowboys reading a battered copy of Fifty Shades of Grey on horseback is always going to be entertaining).