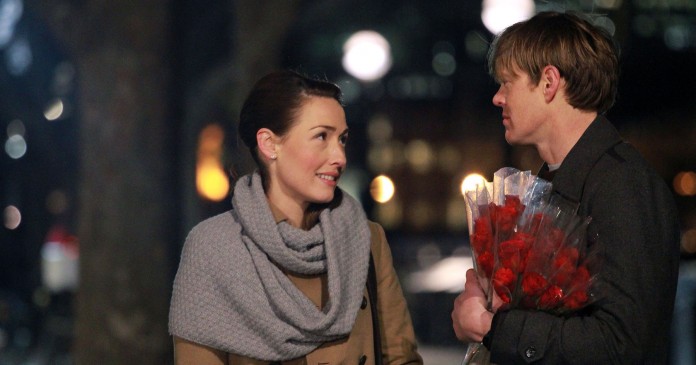 The Richard Curtis, Working Title model for romantic comedies has little place in a contemporary, cinematic landscape. The hackneyed, tired stomping ground is now even being ridiculed and parodied in comedies nowadays, such as in the Paul Rudd and Amy Poehler endeavour They Came Together. With a thirst for innovation within the genre and a sense of ingenuity that will ensure it maintains its popularity, sadly that is undone by filmmakers with an inclination to remain so stubbornly to type, as is evident in Gavin Boyter’s uninspiring feature length debut, Sparks and Embers.

Having been made redundant at a record company, Tom Sanger’s (Kris Marshall) morning is about to get worse, when he finds himself stuck in a lift; with the woman who was behind his recent unemployment, Eloise Martin (Annelise Hesme). Though bickering tirelessly to begin with, when it transpires that the technical fault may be a lengthy one, they decide it may just be best to get along. Fast forward five years, and the pair had embarked on an intense relationship with one another, and have since broken up. Meeting up for a rare drink along London’s Southbank, she’s set to return to France that evening – and Tom has just under an hour to convince her to stay – and get back together with him.

Vying to capture that same sense of enchantment that is prevalent within Richard Linklater’s ‘Before’ trilogy, Sparks and Embers suffers from a cliched, mawkish screenplay. There are similarities to French rom-com Love is in the Air – with a narrative also consisting of two people unwittingly brought together (in this instance, it’s on an airplane), and yet there was a charm, and a distinct lack of contrivance to the tender feature. Sparks and Embers just feels so old-fashioned, and not in a romanticised, treasured way. All of the technology used within the film is outdated too, the phones, the iPods – it’s as though the film was made 10 years ago (perhaps it was). To be honest though, even then it would have felt out of date.

You struggle to root for the core relationship too, which goes against the entire purpose of this endeavour, and conflicts against the tropes of the genre. Films of this nature can be endearing if you believe in them, but that’s simply not the case in this instance. Perhaps it’s because Tom is so frightfully and reprehensibly misogynistic towards Eloise in the beginning that you think less of him for being so ignorant, and less of her for falling for it. The performances from both Marshall and Hesme do little to inspire either, but in the latter’s defence, English is her second language. What’s his excuse though?

Sparks and Embers does make you question the place of such films in modern cinema. Of course there is an obligation to encourage aspiring filmmakers to take that leap, and it’s highly commendable when they do – but if you’re lucky enough to secure funding to make a movie, it does become somewhat less admirable when not attempting anything unique, resourceful or creative – instead offering something we’ve seen countless times before, and regrettably, are likely to come across several times again.