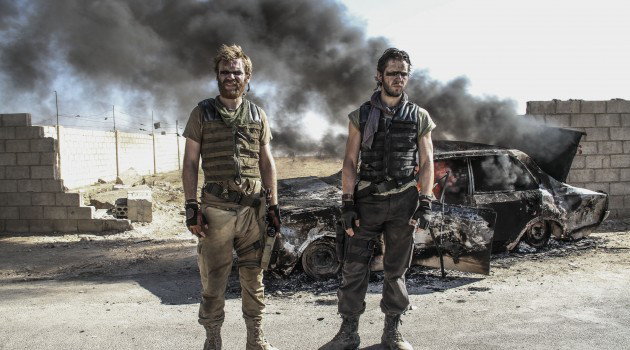 Complete with engaging, morally ambiguous, colloquial conversation throughout – it only takes a few moments to realise that Simon Dixon’s Tiger Raid is based on a stage production. A more accomplished endeavour wouldn’t have allowed for the fact this is an adaptation of Mick Donnellan’s Radio Luxembourg to be so patently evident, but that’s not to say there isn’t plenty to admire in the director’s debut feature film.

Joe (Brian Gleeson) and Paddy (Damien Molony) are mercenaries, travelling across the unforgiving landscape of war-torn Iraq, tasked with a covert operation to kidnap Shadha (Sofia Boutella) who is the offspring of a local magnate. During the laborious venture they indulge in profound, sordid and heated conversation concerning their own backgrounds, as a battle of wills and wits unfolds between them – only for the seemingly straightforward mission to take an unexpected turn, where the semblance of loyalty they have mustered up between them is put to the test.

Dixon’s feature makes for an immersive cinematic experience, as you feel claustrophobic in the confined spaces the story unravels in, anticipating the closing credits. Generally speaking that’s not usually a good sign, but in this case it’s to do with the indelible atmosphere, deliberately intended and inflicted upon the viewer, in what is a truly visceral slice of contemporary cinema as we, much like the protagonists, are thrown into this hellish environment. Some of the dialogue has a wonderful flow to it too, but regrettably the minimalist nature of this set-up makes for a film that struggles to sustain our attention and investment throughout, and while the finale seems somewhat hurried, it’s not as detrimental as it should be given we’re just about ready to go home.

It’s a shame we don’t see more of the landscape as the cinematography is stunning, with the burnt orange glow of the evening sunset prevalent, adding a certain vibrancy to proceedings and very much placing us in this world. The characters are simply not likeable enough however, and though the chemistry (and performances) between Molony and Gleeson are impressive, the reprehensible nature of the pair works against the film. It’s pleasing to see Boutella be given a platform to show off her dramatic chops too, as so far her two more prominent roles have come in Kingsman and Star Trek, where dialogue wise she was limited, unable to be fully nuanced in her depiction – whereas in this we can tell she’s got talent.

Though a flawed production, Tiger Raid is enriched by its war-torn backdrop, with a certain intensity injected into proceedings, and an overriding sense of desolation that adds to the tone. The narrative does go round in circles however and needless to say by the close of play tedium has well and truly taken over – but as debuts go, Dixon has presented a feature that could well signal the start of a prosperous career in film.