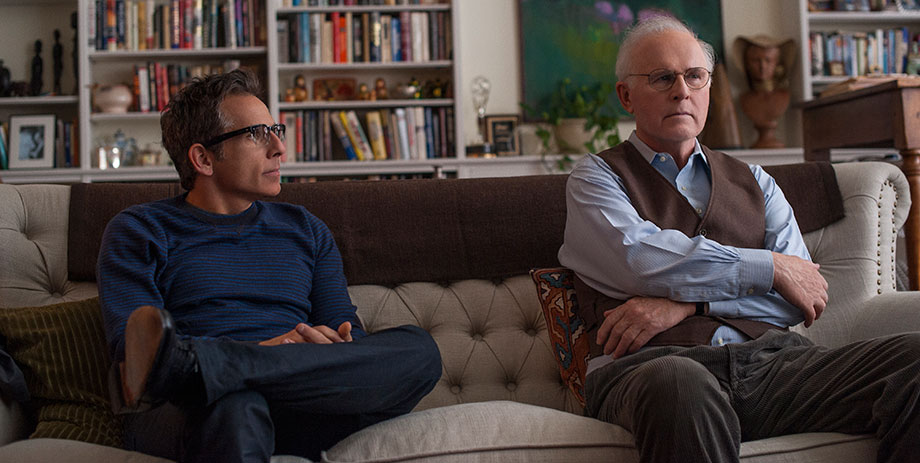 Josh (Stiller) teaches documentary filmmaking at a NY college, but has himself treading water for the better part of a decade. He’s very conscious of being in the shadow of his father-in-law (Charles Grodin), an esteemed documentarist who is to receive a Lincoln Centre life time achievement award in recognition of his contribution to the form. Josh’s wife Cornelia (Naomi Watts) is also her father’s producer, which exacerbates Josh’s feelings of creative inferiority.

One evening after a lecture, a student (Adam Driver) engages Josh in conversation, but as it turns out Jamie isn’t a student at all, but a fan of Josh’s work, and he inveigles himself into having dinner with Josh. A friendship quickly develops, with Josh and Cornelia finding themselves drawn to prototypical Brooklyn hipster Jamie and his adorable wife Darby (Amanda Seyfried) at the expense of their friendships with their peers

. An invigorated Josh and Cornelia engage in all sorts of ‘youthful’ activities with their new besties. But as Josh is drawn into helping Jamie with his documentary, finding inspiration through his new pal’s boundless enthusiasm to get him over his own creative impasse, he becomes aware that all is not quite what it seems with Jamie and Darby, and their real intentions for inserting themselves into their lives.

There’s little doubt that we’re in the borough of Baumbach/Brooklyn here; this is the milieu in which he was born and raised, and in which all his films take place; the exception is Margot at the Wedding, set where these same people take their holidays or relocate. As these are Baumbach’s people his comedies of manners never really skewer them too pointedly, as his always obvious affection for them means that he nips rather than bites the hand that feeds him. Baumbach has been making variations on the enjoyable The Squid and the Whale since 2005, and it’s rather thin thematic broth to have drawn from so many times with such little variation in the seasoning.

Apart from Stiller, the cast never really seems to get out of third or even second gear until well into the 3rd act, and by then it’s hard to care much about the various revelations and the people concerned. The theme of middle aged couples mired in ennui who are drawn back to life by exotic younger companions has been explored in various genres, the usual outcome being a new found acceptance of middle age and of each other.

Suffice it to say that Baumbach doesn’t really stray from the tired and trusted here either, but maybe I’ve just seen this particular plot too many times to be at all surprised. Stiller fans will enjoy their man doing his thing, as will Baumbach fans, but those on the fence or growing weary of Baumbach’s people and their narrow worldview might consider revisiting Sam Mendes’ brilliant American Beauty to see this theme examined in an original and still very funny way.