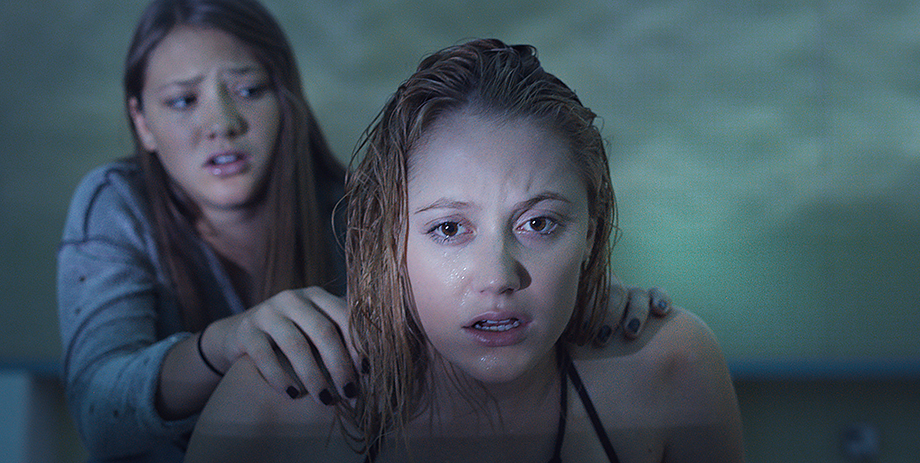 It Follows, director David Robert Mitchell’s second independent feature, has garnered many positive reviews since its debut at Cannes in May and has secured distribution in many key territories, so this is likely the last time he’ll work within the creative and technical restrictions of budgets this low. The film, an intriguing teen horror that might have been titled ‘STH (Sexually Transmitted Haunting)’, thankfully doesn’t excuse or work around its low budget by resorting to the overused ‘found footage’ ploy, and its strengths lie in the intriguing premise, appealing lead and supports, and superbly effective score.

19 year old Jay (Maika Monroe, The Guest) lives in a pleasant suburban neighbourhood that resembles thousands of other such neighbourhoods throughout North America. She‘s an average American teenager, spending time with her pals and dating, and it’s the dating part that is her undoing, when a sexual tryst with Hugh (Jake Weary), the boy she’s been seeing for a short time, turns weird post coitus. Rendered unconscious by her date, Jay awakens to find herself tied to a chair in a parking garage, where Hugh reveals that he’s passed something terrible on to her that is far worse than a pesky STD. Jay is now beset by a malevolent being that will pursue her, in various human forms both familiar and unknown, until it kills her; her only possible hope is to have sex with someone else, and pass this terrible thing on to that person.

The locations are particularly well utilised (suburban and rural Michigan and the ruined environs of Detroit) in tandem with composer Disasterpeace’s score; Jay’s characterless neighbourhood takes on a sinister hue after dark, and the anodyne school and tract housing of the film’s first half stand in stark contrast to the tattered, partially derelict fringes of Detroit that Jay and her friends travel through as the film progresses. The climactic confrontation makes excellent use of an indoor public swimming pool, and is the most inventive scene in the film.

Mitchell’s ambition outstrips his budget, and while the few effects scenes are excusably clumsy, they did elicit laughs from a good many in the audience. There is a noticeable lack of mobile phones and other contemporary electronics in the film, with the intention of placing the action in a sort of undefined any time in the last 30 years or so, but this doesn’t really work. The teenage characters feel decidedly contemporary, and an odd make-up compact e-reader used by one character, one of the few devices that is current (but fanciful), seems like an orphan idea and as such is somewhat confusing.

Although it overstretches itself in trying to execute arthouse pretensions on a cheapie slasher budget, It Follows succeeds because it invests the genre’s evergreen obsession with teen sexuality and its deadly consequences with some new life, and some new death.

Exclusive: Director Yann Demange on what drew him to the story of White Boy Rick