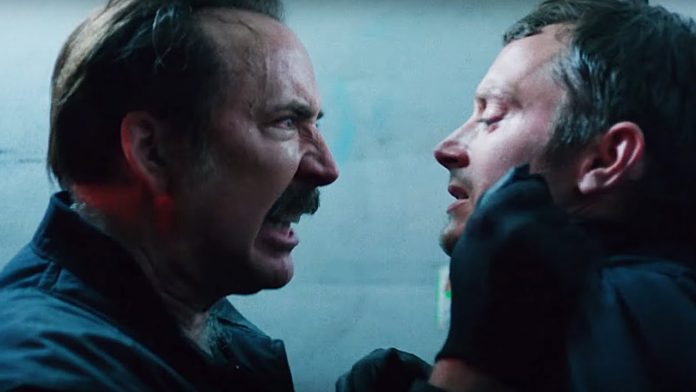 Usually, if the opening shot of a movie is that of a close-up of a woman’s breasts, you can’t be blamed for assuming there’s only one way this title is likely to go, expecting a somewhat sordid, gratuitous thriller with little nuance or ambition. But in the case of Alex and Benjamin Brewer’s The Trust you’d be mistaken – for what transpires is an intelligent, compelling piece of contemporary cinema that subverts, and transcends expectations in a truly glorious way.

Jim Stone (Nicolas Cage) and David Waters (Elijah Wood) are eccentric, unconventional cops and friends, who work in the evidence room of the Las Vegas Police Department. Under the radar somewhat, when the former discovers a staggeringly high bail receipt in connection to a recent drug dealer’s release – he goes in search of the magnate, to find the source of the large sum of money. When discovering a seemingly impenetrable safe, they set off to find a way to get into the damn thing.

Though incredibly funny in parts, with a handful of one-liners that will have the whole room laughing, such farcicality is persistently enriched by the sheer darkness that lingers. The combination of the two conflicted notions is perfectly judged, as we move seamlessly from from being comedic to sinister, in the blink of an eye. The two remain side by side throughout, there’s no palpable tonal shift, just a triumphant compatibility. The uneasy, disquieting feeling that exists is akin to that of what we’ve come to associate with the Coen brothers, with shades of Fargo prevalent, particularly in how, and in spite of the protagonist’s assurances otherwise, you anticipate, nervously, the whole supposedly straightforward plan falling apart, knowing that when it goes, it could get very messy.

Both roles are brought to life emphatically by Cage and Wood, as two characters who are completely mad, but in an endearingly subtle way. Cage plays unhinged like nobody else, but this doesn’t go the same lengths we see the actor reach in the likes of Bad Lieutenant or Raising Arizona, instead Jim Stone just has certain quirks and peculiarities that make for a really absorbing character you constantly feel on edge with, and yet root for throughout. It works too as Wood’s David Waters represents the straight guy, the more normal of the two – but like any archetypal double act, he’s equally as bonkers, he just carries it better.

Set in Vegas, The Trust ensures we don’t see the setting that we have grown so accustomed to cinematically. We have little cliched stock footage of the Strip, and instead we veer down the shady back streets, the side that definitely exists, but one us tourists (and filmgoers) know so little about. That much is obvious from the the opening, swooping shot that surveys the glitzy, vibrant images of the hotels, and then enters into the window of a shabby looking motel on a side street. That’s where this tale is set, and it’s where this tale thrives.

Win No Man of God on DVD