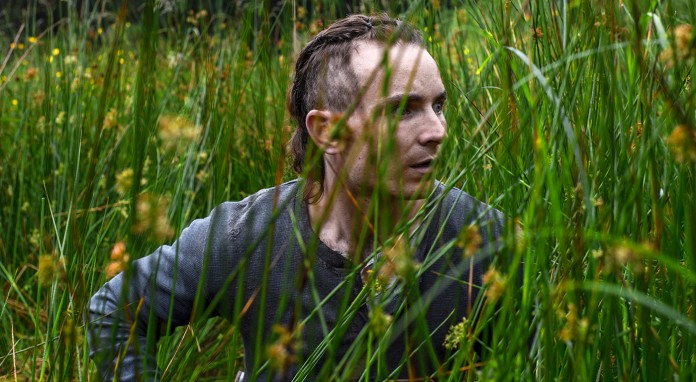 When reporting on a set visit, you take in as much as you can digest, gaining a real flavour for the production at hand. Yet it still becomes completely impossible to tell whether the project will be a hit, or a miss. But there was something about The Survivalist, an atmosphere in the air, where you felt that everybody associated to this endeavour was confident it would be a success. Though not yet released – a BAFTA nomination for Stephen Fingleton in the ‘Outstanding Debut’ category would suggest it’s going to be alright.

HeyUGuys spend the day on set, on location on a farm in Northern Ireland. The sense of isolation that is so prevalent in the movie was felt in this remote setting, and given we’re dealing with protagonists who live off the land, to be in an area where animals were roaming and the grass was green and prosperous – it made for an immersive experience, and it’s one that the actors certainly reaped the benefits of.

“Just being in this environment, with all the animals and the greenery and the trees and the birds and the chickens, it all helps us stay in that frame of mind,” Mia Goth, of Nymphomaniac fame, explained. “I camped here, too. I slept on set, on the field. It helps, people underestimate our abilities and what we need to actually survive – you don’t need much. If you’ve got a pillow, a bottle of water, you’re sorted.”

It’s that notion of surviving off your own back that sets the tone for this title, set in the not-too-distant future, where much of the human race has been wiped out, and we meet Martin McCann’s unnamed character, vying tirelessly to get by off natural resources, with a shelter hidden deep in the forest.

“I began thinking, how would I react, how would I defend myself in a world without money? What can you do? What would be of worth? The film comes from thinking about how the forces of capitalism extends beyond the life of society,” Fingleton told us.

It was this hypothetical scenario which enticed actress Olwen Fouere, too. “What appealed to me about the project when I got sent the script, was the question it raised and the world Stephen is describing is a world we could very well be living in, in as little as 40 years time, if not before,” she said. “So I was attracted by the questions that poses – what happens to human beings when they have to live in this way? How all of the societal norms that we accept are completely dismantled. There are only remnants of the family values idea, so the mother/daughter relationship is not at all a conventional or traditional one, it’s just a biological fact. Their prime motive is survival, and it’s very much about the individual.

“I’ve always had quite a pessimistic view of the human race. If you think of the Earth as an organism, which it is, we’re the biggest disease.”

Meanwhile, McCann – who was looking rather gaunt during our interview, given the weight he had to lose for the role – was put on an intense survival regime to help get into the head of the part he is embodying.

“There was a lot of YouTube, watching Bear Grylls and Alan Titchmarsh videos at three in the morning because I can’t sleep,” he laughed. “But it all helps, and I did a four day survival course in the forest and I built my own shelter and trained with real guys who really know how to survive out in the wilderness and that really did help. Small things, creating traps, just fending for yourself – what to eat, what not to eat. If this happened in real life, come and find me and we’ll go live in a shelter somewhere and grow some beans.”

McCann was quick to praise Fingleton too, and thank him for this unique opportunity. “Stephen is brilliant, genuinely brilliant. I think this will be a great debut for him. I’ve seen bits here and there he’s cut together – and there’s nothing television about it, it’s a real film, the framing, composition,” he continued. “I feel lucky Stephen took a punt on me and decided to go with me. I’m trying my best to deliver and hopefully won’t let anyone down. This is a big role for me and I understand that.”

Both Goth and Fouere also had kind words to say of the debut filmmaker, with Goth comparing him to Lars von Trier, who she had just worked with on Nymphomaniac.

“Stephen has a very clear vision of what he wants and that’s a huge positive, and he always puts the actors first, lets them collaborate and make changes to the scene, which is similar to Lars von Trier. If it benefits the scene, then why not? If I hadn’t known I would never have assumed Stephen was a first time director.”

Fouere echoed that sentiment, and yet admitted it was the fact Fingleton was a first-time filmmaker which was so appealing to her.

“I always love working with somebody doing their first project. I was immediately attracted to what Stephen had written and the two short films that I saw, and he’s really wild but he has eyes like a hawk, he sees absolutely everything that’s going on in your mind, which I find fascinating and reassuring. He’s relentless, but I am too, so that works well.”

Fingleton must be commended too, for sticking to his gun(s) and rejecting an approach from an American producer, wanting to keep this endeavour intimate, and vitally, in Northern Ireland.

“Early in the process I was approached by a big US producer who wanted to make a much larger film out of it, set in America, and I wasn’t interested at all. This was the right way to do it. We want the audience to wonder what’s going on, to pick up on clues and study the behaviour of these characters. We work out the shape of the world, from now it’s informed the characters. This is a science fiction film without any CGI, at all.”

“For starters, there’s one shotgun in the film – if you set in America they’d be packing AKs when they arrive, there would be so many guns it’s untrue. This film is set in Britain and Ireland, and there’s an absence of weaponry and people have to use whatever tools there are to hand.”

Finally, Fingleton had a lot to say on the rise of Northern Irish cinema, as following on from the likes of ’71, Shadow Dancer and Good Vibrations – it seems to be a nation prospering at present, but for Fingleton, it’s essential to make a film set in the future, and not just the past.

“There’s a Northern Irish new wave, and it’s come at exactly the right time, post-Troubles, we’re able to make films coming from our specific cultural identity, but they’re not about the Troubles,” he finished. “We have something to say now that we don’t have to talk about that.”

The Survivalist is released on February 12th.