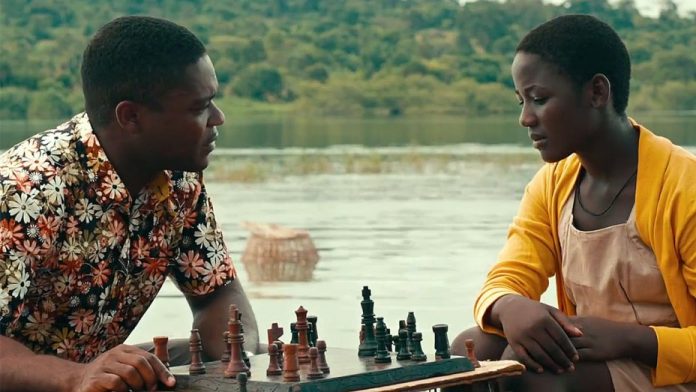 Disney’s latest live action feature is The Queen of Katwe; a traditionalist, endearingly conventional tale from multiple BAFTA nominee Mira Nair, bearing similarities to other sporting underdog tales such as Cool Runnings, while also based on an inspiring true story.

Madina Nalwanga plays Phiona Mutesi, who lives with her mother (Lupita Nyong’o) and family in the slums, selling corn to make money. But when the local sports coach Robert Katende (David Oyelowo) invites the youngster to his chess club, she finds a purpose in the sport, inspired by the notion that anybody can triumph – and her unique ability to think several moves ahead gives her an advantage over her opponents, entering in to several competitions at prestigious schools across Uganda, and Africa. Her social class ensures she’s the underdog, coming up against more privileged children with educations – but that doesn’t stop the trophies coming in.

The rules of chess, when explained to the protagonist, work as a (somewhat unsubtle) metaphor for life, about overcoming obstacles that seem formidable, while Phiona’s maturity s shadowed by her rise through the sport, as she grows both as a young woman, and a chess champion. Nair has created a film with an indelibly enchanting tone, enhanced by the use of traditional African music that helps inform the atmosphere and add a distinctive geniality to proceedings. Meanwhile Oyelowo’s performance is strong, bringing such warmth to this tale, emblematic of the tone that Nair is vying to achieve, never once compromising on the more profound elements of the narrative, while adding a vital comedic touch. The breakthrough performance by Nalwanga is impressive too, maintaining a vital sense of understatement even in the more dramatic of situations.

Needless to say, The Queen of Katwe does become somewhat melodramatic as we progress towards the latter stages, while we stringently follow the beats of the archetypal underdog narrative, following all of the peaks and troughs, which you can spot a mile off. But sometimes there’s a comfortability of sorts to this sense of familiarity, indulging in a film that plays out just as you hope and expect it to – and this charming endeavour is of that very nature.