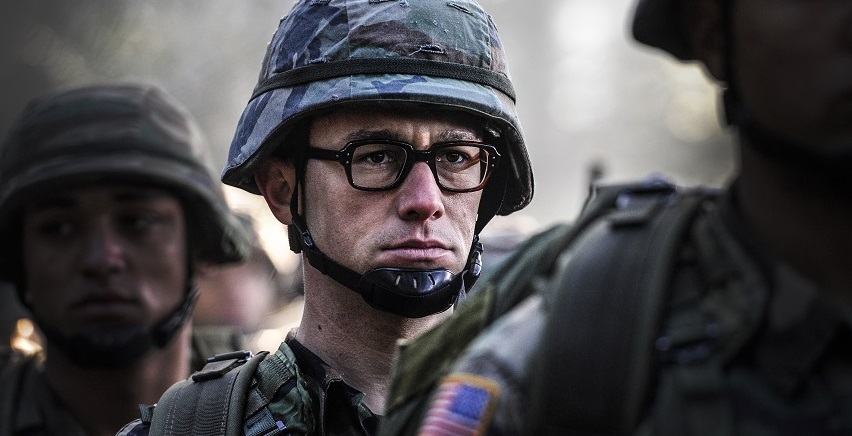 Oliver Stone’s tendency to dramatise significant, politically inclined events on the silver screen continues with Snowden, a biopic of one of the world’s most wanted men. There’s no denying how incredible a narrative this is, and the sheer wealth of potential that lies within this man’s remarkable life story. But an amazing story counts for very little when told in such a clumsy, unsubtle and conventional way.

Joseph Gordon-Levitt puts on a silly voice to take on the eponymous lead, who was discharged from the army following a leg injury, only to then train to become a CIA agent under the guidance of Corbin O’Brian (Rhys Ifans). Attempting to balance his elusive vocation with his relationship with Lindsay Mills (Shailene Woodley), Edward Snowden is eventually employed by the NSA, and stationed out in Hawaii. Though living a comfortable life, he becomes increasingly more disenchanted with the way the States conduct their business, concerned by the intrusion into the public’s privacy – and so he calls on the assistance of documentary filmmakers Laura Poitras (Melissa Leo) and Glenn Greenwald (Zachary Quinto) and journalist Ewen MacAskill (Tom Wilkinson) to make his findings public – aware that his life will never quite be the same again.

In the opening credits of this picture comes a rather vital nugget of information; as Stone reminds us that this production is merely a dramatisation of real events, which is something you may want to bear in mind, for Snowden is far from an authentic, naturalistic retelling of events. Instead this feature is presented as a somewhat generic thriller, playing up to the beats of the genre in a formulaic way. Stone also heroises Snowden, and though millions worldwide admire the man and appreciate everything he has done – a filmmaker has more of a responsibility to be impartial and detach themselves from the content, but Stone rarely explores the flaws of Snowden, and this detracts from the humanity of the film. The final scene is literally a room full of people applauding him.

Stone attempts to cover too much ground too, and a better biopic chooses a brief moment in the subject’s life – be it the Selma march in Selma, or Jimmy Dean’s return home in Life – it’s taking these two week long periods and using this time to be emblematic of everything the subject stood for. Snowden, on the other hand, takes places across nine years. We even delve into the time spent with the documentary filmmakers when shooting Citizenfour, watching on as they first meet Snowden, and the subsequent time spent in his Hong Kong hotel room. Well here’s a thought, if you really want to know more about this remarkable story – just watch that instead.

Mark Rylance stars in trailer for ‘The Phantom of the Open’