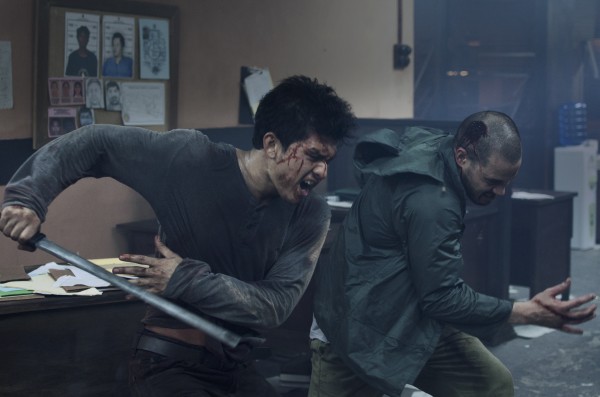 “I’m shitting my pants” was the line uttered by co-directors Kimo Stamboel and Timo Tjahjanto when introducing their latest production Headshot to a rowdy crowd at the Toronto Film Festival. Needless to say, the only people who would have to worry about that are those in the audience, experiencing this savage, gory and unrelenting martial arts endeavour.

Iko Uwais plays an unnamed man who washes ashore, taken to hospital and nursed back to health by the diligent doctor Ailin (Chelsea Islan). When he awakes from his coma, he has no recollection of how he ended up in such a state, unable to even remember his own name. So after deciding he wants to be known as Ishmael, flashbacks begin to haunt him, and he realises that he has ties to the brutal fugitive Lee (Sunny Pang) who recently escaped from maximum security prison. Though he’s not sure exactly what these connections are, Lee’s memory isn’t quite so volatile, and a game of cat and mouse ensues – leaving Ishmael with no choice but to fight back.

Directors Kimo and Timo introduce us to the nefarious antagonist of the film before we first meet Ishmael – which is a clever technique as we become aware of just how formidable and callous he is from the off-set, knowing exactly what our hero is in line for. Ishmael makes for an interesting entry point into this tale too, representing something of a blank canvas, similarly to that of Jason Bourne, as he pieces his history together just as we are. There’s also a blurring of the line between good and evil, as we almost become reluctant to invest wholeheartedly in his cause as we know he has an association to Lee, we just aren’t quite sure of what it is.

The film does rely far too predominantly on shock value however, and where previous Indonesian martial arts thriller The Raid thrived in the breathtaking choreography, appearing almost like a dance, with a majestic elegance going hand in hand with the sheer brutality, in Headshot it’s a little too gory in parts, and too concerned with the gimmicks. Subtlety is by no means the film’s strongpoint, becoming horribly mawkish in the latter stages, and all too Hollywoodised, a notion enforced by the fact the occasional line is delivered in English, with a contrived attempt to tailor this production for an international audience.

After the success of The Raid though, it’s hardly surprising that be the case – and while Gareth Evans’ feature has been so important to the Indonesian film industry, there was always the fear you’d see a surge of films vying to ride on the coattails of the film’s success, and sadly Headshot falls into that very category.

Iko Uwais to play the villain in ‘The Expendables 4’