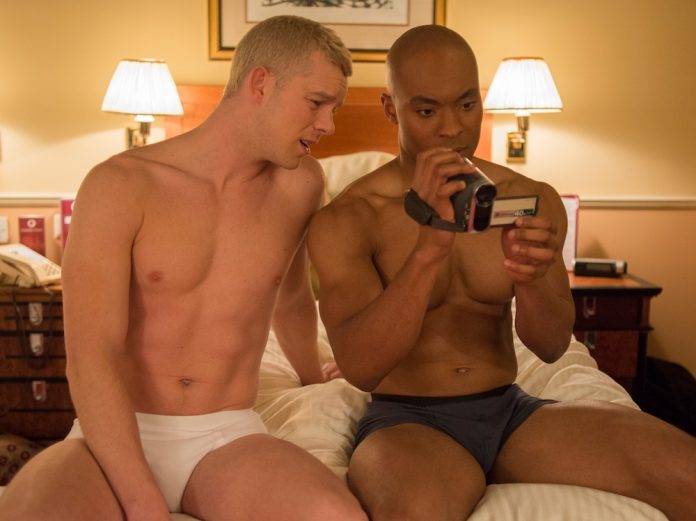 Ben A. Williams presents his feature length debut The Pass amidst a current climate where footballers feel as though they’re unable to come out. Though undoubtedly a flawed endeavour, it’s imperative we add to the discussion, as a theme barely discussed in real life, never mind up on the big screen, as we scrutinise over the ugliest side of the beautiful game.

Russell Tovey plays Jason, an idealistic, ambitious 19 year old footballer, who has come through the academy alongside his oldest friend Ade (Arinze Kene), only for the pair to find themselves in a Romanian hotel room, the night before a Champion’s League fixture. If picked, the match would be their very first appearance, and in keeping with the idea of firsts, the pair share a kiss. Fast forward five years and then five years again – and Jason hasn’t come out publicly, nor come to terms personally with the fact he’s gay, living a lie and frightened to be himself in the suffocating culture of football.

Williams, alongside writer John Donnelly, have created a unique and intriguing way to study this theme, avoiding the obvious route which is to study the reaction of the public, how the terraces respond to such news, how teammates do. Instead this feature remains mostly inside the minds of the two protagonists, making for a more subtle affair. The three act structure works well too, presented like a stage play – three individual, fixed settings, with a maximum of three characters at any given time, though when using this particular method the dialogue becomes the most important element, and a sharp screenplay is required, and yet it remains too contrived in its execution. The way the pair discuss football is unnatural, like the guy at work who supports Manchester United but really only ever watches the World Cup, all quite cliched, and obvious. But then when you consider the pun in the film’s title, it’s hardly surprising.

Thankfully, however, the two leading performances ensure this remains watchable, particularly by Tovey who is playing a truly reprehensible figure, distinctly unlikeable, he’s egotistic, selfish and a bully, and yet the nuance the actor carries makes for an empathetic figure, as the pain that derives from his secret sexuality is palpable, particularly in the way he attempts to convince himself he’s straight, which just about keeps the viewer onside.