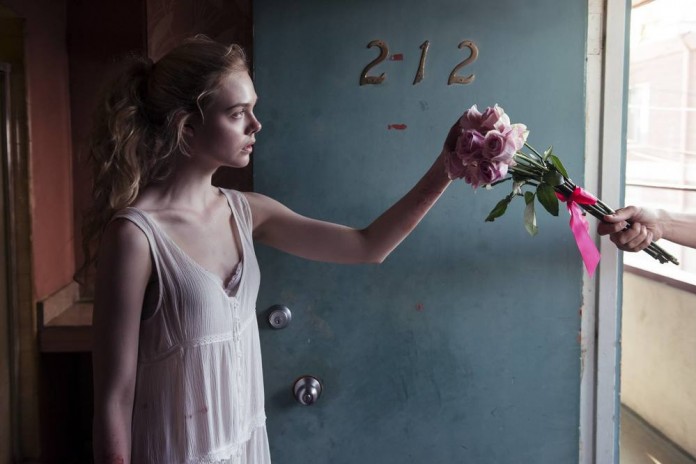 After blazing onto the screen with Drive, Nicolas Winding Refn immediately became a cineaste’s darling. His follow-up Only God Forgives was less kindly received, so hopes were high for The Neon Demon. Would we be dazzled by Refn’s brilliance or disappointed by his story telling? Well, a little bit of both.

The Neon Demon tells the familiar tale of a young girl heading to LA from nowhereville to make her fortune as a model. Elle Fanning is the doe-eyed ingénue Jessie, sweet sixteen and – in the opening scene – drenched in blood. She’s being photographed by Dean (Karl Glusman), who she met on the net. The make-up artist Ruby (Jena Malone) befriends this bloody child and takes her out to a party where she’s introduced to fellow models Gigi (Bella Heathcote) and Sarah (Abbey Lee). This triumvirate of knowing, cynical women, the three witches of LA, articulate all that is wrong with the vacuous and superficial world of modelling as they visually dissect Jessie.

Other characters make brief appearances, from Jan (Christina Hendricks), the model agency boss, to Jack (Desmond Harrington), a sinister top photographer. It soon transpires that whoever meets Jessie falls for her beauty big time, the only characters immune to her charms being the two models, who quickly see that the new girl in town is their latest threat. Refn puts the audience in a tricky position here: on the one hand, we are viewing the film as a critique of the bitchy modelling world and on the other, we are looking at Fanning and wondering why everyone falls for her. She’s lovely, but she’s certainly no lovelier than the other models we see. How superficial of us. Or are we not seeing something the characters see? Is she the demon of the film, putting some kind of devilish charm on those she meets? When Refn hints at this – in a beautifully shot scene in which Jessie’s multiply mirrored face looms in on the screen – the film starts to look more interesting. But the hints at horror Refn makes, with visual references to Carrie in particular, never go very far. When we expect something supernatural to happen, we are brought back to reality with a prosaic thud.

As with Refn’s previous films, The Neon Demon looks amazing. The opening credits alone are a masterclass in cinematography, and the director continues to play with colour and light in a way that takes your breath away. Cliff Martinez again composes the music and thus there is the familiar booming and unnerving score accompanying Refn’s visual feast. Fanning is fantastic as the not so sweet sixteen-year-old and Keanu Reeves as the seedy motel owner Hank puts in a fine cameo. Heathcote and Lee also show they are not just pretty faces with Gigi providing much of the humour and Sarah showing much of the pain as a woman well aware of her sell-by date.

That is all well and good. But what about the story? While not expecting social realism from Refn, a little credible storytelling wouldn’t go amiss. Would an LA make-up artist to the city’s top photographer need a second job as a mortician beautician? And what about the depiction of the women who inhabit this world? Is Refn a voyeuristic misogynist? From the showering models drenched in blood to the rape, via the lesbian undertones, this film reeks of it. It seems that it’s not Jessie who is demonic, but all the women in the film. The men don’t come out looking so great, either, to be fair. Hank is particularly loathsome while Dean is the only character with a moral compass in this city of lost souls.

This is hugely disappointing as there is a brilliant film lurking inside Refn, but this bloody mess is not it. To paraphrase a friend: women beware women beware Nicolas Winding Refn.

Elle Fanning stars in trailer for ‘The Girl from Plainville’

Gillian Anderson features in trailer for season 2 of ‘The Great’