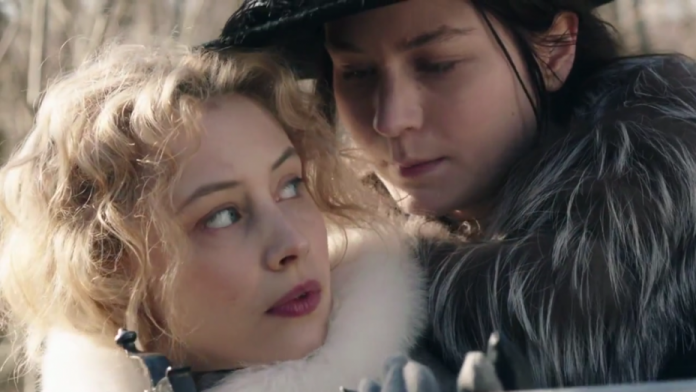 One of the more engaging elements of the period drama, and a notion prevalent in popular TV series Downton Abbey and features such as the recent Whit Stillman endeavour Love & Friendship, is to have a window into an era where humanity is just as flawed as we are now, with a myriad of characters often engulfed in a web of deceit and corruption, surrounding power, money and sex. We can relate to this world through the imperfections of people, and certain sensibilities within us that remain relevant today – and it’s what sets the tone for Mika Kaurismaki’s historical drama The Girl King.

Set in 17th century Sweden, we delve into the life of Queen Kristina (Malin Buska), on the throne from the age of just six. Surrounded by a collective of men, including Chancellor Axel Oxenstierna (Michael Nyqvist), the seemingly susceptible young woman is under pressure to marry and eventually give birth to an heir – with the latter proposing his son Johan (Lucas Bryant) be the chosen one. But the Queen is more concerned with establishing the nation as a forerunner in the arts, while also becoming romantically entwined with Countess Ebba Sparre (Sarah Gadon). Where true love should prevail, those around the Queen ensure that not be the case, attempting to use the lady-in-waiting as a means of controlling Kristina – though she’s not quite as impressionable as they were led to believe.

The story of Queen Kristina is an incredible, multi-faceted one, not quite done justice to. When dealing with a complex narrative with so many contributing themes, from being Queen at a young age and following in her father’s footsteps, to navigating her way around having such power and being a woman during this time, not to mention the continuing religious disputes and her sexual orientation. It’s too much of a challenge to cover all bases, and yet Kaurismaki attempts to do so nonetheless and it’s to the film’s detriment. We need more focus, to have a prevalent theme and base the narrative around it, as less can often be so much more; just look at Selma.

If you had to choose one, the romance would be the paramount aspect, and yet it feels somewhat hurried in its execution. If you take Carol, for instance, another film depicting the love between two women in a time and society where it’s considered a sin, that built up to the romance through subtle glances between the protagonists and the briefest of touches. We felt it happening, and we wanted it so desperately to be fulfilled. But for Kristina and Ebba we never truly reach that point, and given so much is at stake for them both by partaking in this illicit affair, we need to have more of an understanding why they would put so much as risk for one another, and we don’t truly get a sense of that.

By presenting the picture in the English language too – despite having a cast made up, predominantly, of Swedes, it signals the filmmaker’s intentions to appease a broad market, and yet all it does is detract from the authenticity, not to mention it infiltrates the performances of the actors, far more unnatural in their delivery when not speaking in their native tongue, making the dialogue seem stilted. It’s a shame we don’t quite do justice to this remarkable set of events, yet The Girl King is yet another example of just how many incredible stories out there remain untold.