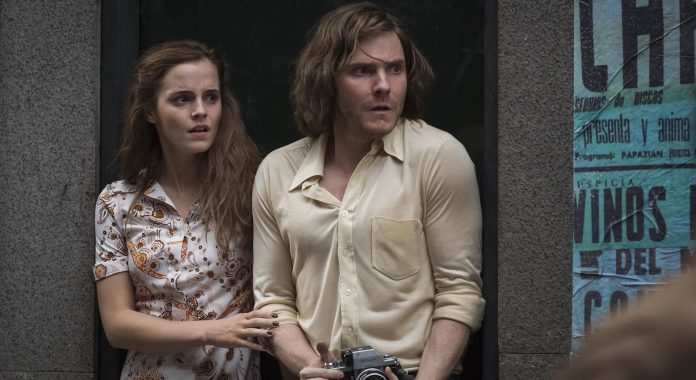 As Florian Gallenberger’s The Colony begins, it sets itself up as a political movie, studying the Pinochet regime in Chile and the implications it had on the people. But as we progress we take a dark turn, and a rapid change of pace and tone occurs, as we head in a completely different direction to what we had anticipated. Though the context of the era depicted is essential, it’s an opening act that is superfluous in its addition, as we take too long before reaching the more captivating elements within this complex narrative.

Set in 1973 – and based on a true story – we meet flight attendant Lena (Emma Watson), who finds herself in Chile for a limited time, where she hopes to surprise her boyfriend, and keen activist, Daniel (Daniel Bruhl). Following his involvement in the protest rallies, Daniel is abducted and consequently tortured by Pinochet’s secret police, and taken to a concealed encampment called Colonia Dignidad, run by the nefarious, elusive Paul Schafer (Michael Nyqvist) under the pretence of a charitable, serene getaway. Desperate to be reunited with her lover, Lena sets off to sign up and become a part of this cult with the intention is rescuing Daniel – a task made somewhat harder when she learns of the fact that nobody had ever escaped from this compound.

There is no denying the richness to this quite remarkable set of events, as a breathtaking narrative unfolds that you can’t quite believe is real – yet Gallenberger insists on devaluing his project with a distinctly overstated approach. Rather than just put his faith in the authenticity of the piece, the picture becomes so overtly theatrical. That being said, there’s a much needed subtlety to the character of Schafer, a sinister, reprehensible tyrant. However he’s a character we simply do not explore enough of, not quite utilising the talent of the brilliant Nyqvist, who is tasked with embodying him. He is the story, it’s his life and experiences which, though irrepressibly dark, lay the foundations for this piece, and instead we deviate carelessly into the tale of Lena, who simply isn’t as intriguing a figure to attempt to understand.

With a German director at the helm, set in Chile and featuring a British actress in the leading role, The Colony is a film vying to appeal to an international market, but in doing so, the dialogue is somewhat stilted and contrived in its execution, with very concise sentences, with every detail over-explained in rather obvious terms – detracting from the realism of the piece. It doesn’t help when those tasked with bringing the dialogue to life do a mediocre job of it either, with Watson in particularly standing out for all the wrong reasons.

The film does reach a compelling climax however, with an absorbing finale that at times has you perched on the very edge of your seat. It’s a finale that could compete with Argo for its suspenseful nature and unrelenting pace – but this uses far too much artistic licence, and even more so than Ben Affleck did, and it becomes too much of a challenge to believe in what we’re witnessing, which completely cheapens the severity of the issue at hand, and our investment in this potentially thrilling endeavour.

The Colony is out in cinemas and on VOD from July 1st.