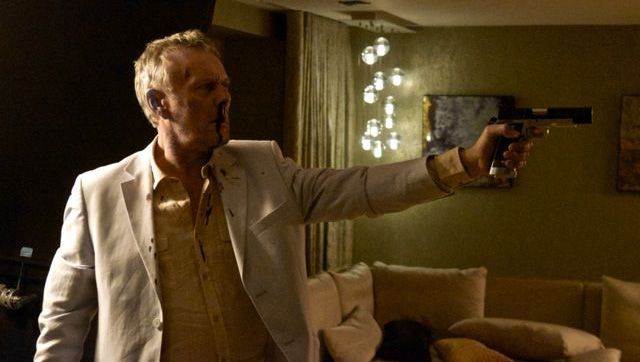 Ryan Bonder’s sophomore feature film – following Daydrift back in 1999 – is The Brother, a complex psychological thriller that boasts a myriad of twists and turns, using the film’s protagonist as something of a blank canvas, a cipher who seems as unsuspecting as the audience are, allowing us to adopt his blissful perspective and embody the role. While that lays the foundations for any good thriller to thrive off, regrettably a lacklustre screenplay and mediocre performances struggle to do this intriguing narrative justice.

Tygh Runyan plays Adam, who works in a cloakroom, vying to escape his family’s involvement in the trepidatious business of arms dealing – but it’s one he finds himself sucked unwittingly back into, when tasked with protecting his father Jack (Anthony Head), who is showing early signs of dementia, and his wayward brother Eli (Jed Rees). Having to pick up the pieces, the deeper in Adam drops, the more corrupt and dangerous the situation proves to be, as he clashes with the uncompromising Tabitha (Belinda Stewart-Wilson) and his uncle Reuben (played by the impressive Rob Dixon).

The film vies to be erotic in parts, using Tabitha’s seductive nature and beguiling demeanour to drive the narrative forward, but any scenes designed to evoke a sense of sensuality are terribly misjudged and are simply awkward to sit through. The soundtrack helps to distract us though, with well implemented songs that enrich certain sequences. However the one constant, and to the film’s detriment, is Runyan, who is playing a brooding, pensive protagonist. When dealing with a lead role of this nature you require an ineffable sense of charisma, and while appreciating that not everyone can be Ryan Gosling in Drive, to carry a film without the benefit of many words, you just require a little more of an engaging performance, and it’s one that Runyan sadly doesn’t provide.

Nonetheless, on a more positive note, The Brother offers an authentic depiction of London, not vying to appease the tourist board or tap into an American market, steering away from any stock footage of the famous landmarks. You see them looming graciously in the background, but that’s where they remain, which is more representative of a true Londoner’s relationship with the capital, not interacting with the backdrop as such, but just having it remain as a constant portrait of the city you live in. It’s a small consolation, however, for a film that struggles to quite compel in a way that it should have, at the mercy of its quite cheap production values.