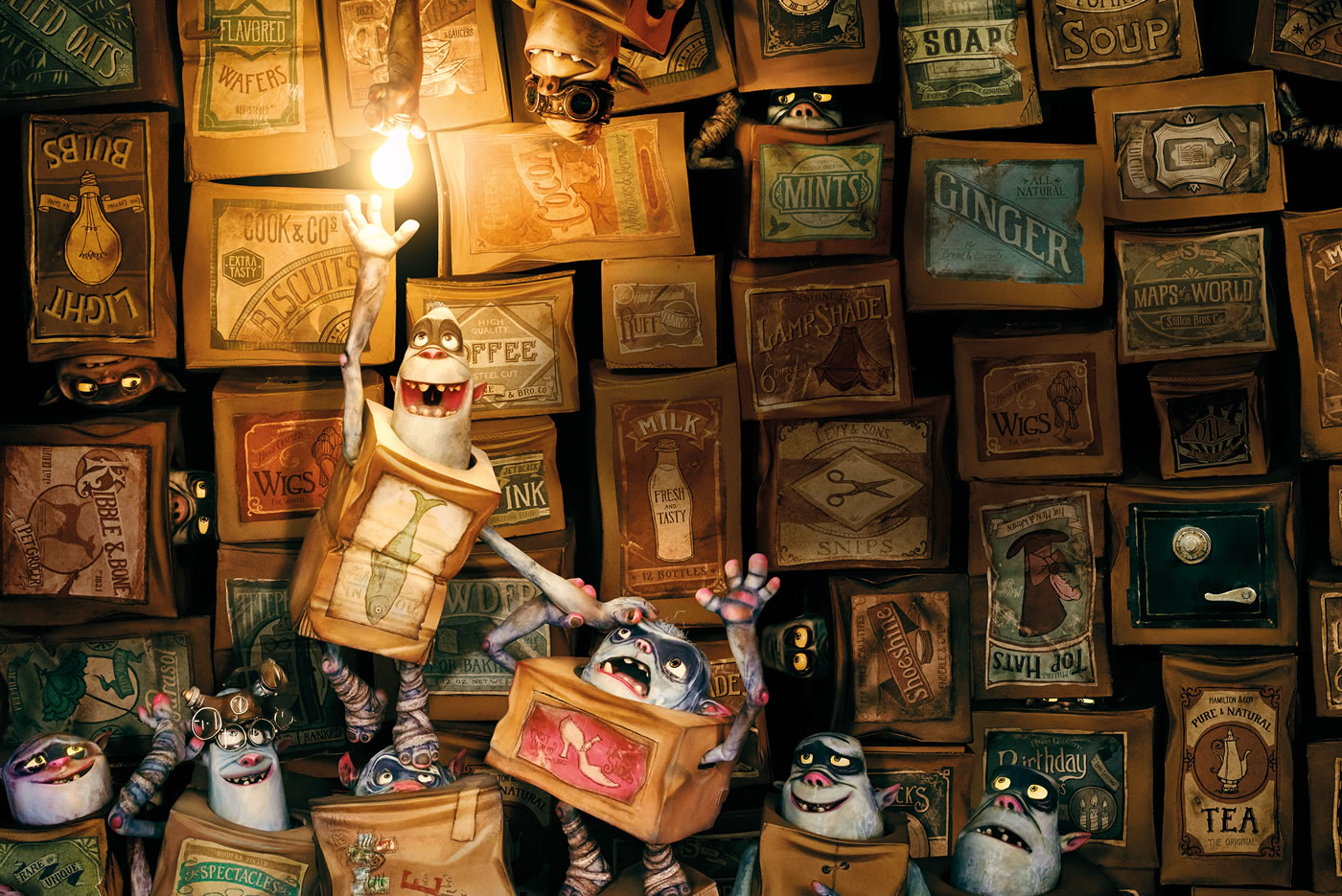 The oldest film festival in the world has premiered one of the newest types of filmmaking. The Boxtrolls is the latest stop-motion animation feature from LAIKA and what a breathtaking and highly entertaining film directors Anthony Stacchi and Graham Annable have delivered.

Based on Alan Snow’s novel Here Be Monsters, the story revolves an orphan boy apparently plucked from the human world as a baby and taken below ground by the Boxtrolls, fluorescent-eyed creatures whose outer skin or clothing are cardboard boxes and they go by the names of what their box contained: thus we have Fish, Knickers, Fragile and so on. The baby comes from Cheesebridge, presided over by Lord Portley-Rind (the silky-voiced Jared Harris, better known as Mad Men’s Lane Price), a dead ringer for Charles Dance whose only interest in life is cheese.

He and the other white-hatted leaders councillors hold meetings that are actually cheese tastings and a new children’s hospital are shunned in favour of financing a giant Brie. His daughter Winnie (Elle Fanning, in a comic turn that channels Miranda Richardson’s Queenie) is also low on her father’s list of priorities. When Archibald Snatcher (Ben Kingsley) offers to eradicate the Boxtrolls from the town in exchange for a coveted white hat, it is out of fear of losing his cheese, not his daughter that Portley-Rind consents. Snatcher is a classic villain, with the voice of Bill Sykes and whose clothes and carriage bring to mind Chitty Chitty Bang Bang’s Child Catcher. His alter ego is Madame Frou Frou, who resembles Dame Edna but is beloved of the men of Cheesebridge.

And what of these trolls? Are they sinister creatures who kidnap children? Of course not. We discover that their underground world is a much brighter, warmer and more loving place than the world above, and in this the film has much in common with The Corpse Bride. It transpires that the kidnapped baby was actually handed over by his father to protect him. Now a young boy, Eggs (Isaac Hempstead Wright), discovers that he is in fact human, but above ground he comes across beings more monstrous than any troll. This is a constant theme in the film, pondered by Snatcher’s henchmen, who often talk of good versus evil. The other theme is that it is possible to change and to cause change, regardless of who you are or where you come from.

The production design dazzles; Paul Lasaine has created a world full of Heath Robinson gadgets that would not look out of place in a Terry Gilliam movie. In fact, Monty Python has a hand in this film thanks to a song written by Eric Idle. Added to that are the myriad voice talents, including Tracy Morgan and Simon Pegg, and one of the best endings I have ever seen in a film. Once again, animation has proved that it stands tall, often producing more nuanced and thrilling movies than its live-action counterparts. The Boxtrolls is full of cheesy puns, roller-coaster adventure and even a little philosophy: in other words it’s the perfect grown-up kids’ movie.