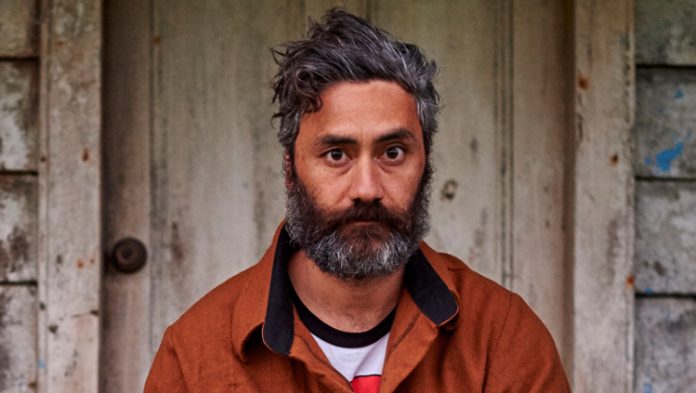 To mark the UK release of Hunt for the Wilderpeople, Taika Waititi’s deadan, festival favourite, we had the immense pleasure to speak to the talented filmmaker, to discuss this distinctive brand of New Zealand comedy.

Waititi also speaks about the balance between comedy and pathos, and the talent of youngster Julian Dennison. He also speaks about Thor: Ragnarok, his next project, and what fans can expect of the film tonally. He goes on to discuss the challenge in pleasing everyone, and how absurd some of the original Thor comics are. Finally he tells us a little about the eagerly anticipated sequel to What We Do In the Shadows.

The film is of course based on a book – which is not nearly as funny as the film which is tonally very different – was it a challenge to find humour in a tale that is steeped in sadness?

At first it was, it took me a few years to realise that I could take some liberties and make the film feel more like my own film, and I thought, if I was making this all up what would I do? I don’t need to be that loyal to it, and that freed up a lot of ideas. I wrote the first draft of this in 2005 and I don’t think it would’ve been as funny as I was trying to be too true to the book, so taking some time away from it was really helpful.

I’m just pleased you didn’t copy the ending from the book, I don’t think I could’ve taken that.

Oh I know, but when I wrote the first draft characters did die. And then I went off and made two others films and realised that it was a bad idea. Too depressing, right?

Julian is so terrific in the lead role, and I saw him in a film called Paper Planes and you could tell he had great comic timing from that. Is he as dry in real life as he is on camera?

Yeah, he is, he’s just like that, very dry and he has a great sense of humour. He actually came up with the idea for the trap door that Rhys Darby’s character has built, so he’s got a really good, sophisticated sense of humour.

He has a great chemistry with Sam – did you have to audition them together to ensure that be the case? Or did you just trust your instincts on that one?

I didn’t actually audition either of them, I’d seen Julian in other stuff and worked with him before so I knew he was great. And Sam, I’d obviously seen before, and we got them together for rehearsals for chemistry, but they were fine, they hit it off straight away. I wouldn’t even have minded if they didn’t get on, that might’ve been even more helpful for the characters. But it’s nice they became good friends.

We’re big fans here at HeyUGuys of The Goonies, of course, and what these films share in common are that they have a child at the heart of their own story – how important is that in this instance?

I think it’s important because you want to see the world and experience going into the wilderness through his eyes and have that first experience with him. The way that kids see the world is way more interesting than the way grown ups do.

You have a cameo in the film, which is probably the funniest scene in it. Was it always the ambition to get involved in front of the camera – when did the idea for you to play that part come about?

I was always going to do something but I wasn’t sure and I had a few other people in mind for that role. But in the end it was fun for me to play it because I based that speech on one I’d heard at a real funeral so I already knew how to do it, I remembered it from about ten years earlier. I always try to give myself a small role.

You heard a speech like that at a real funeral?

Yeah that’s right, it’s based on a real sermon.

Do you find as a comic writer that you’re often consciously looking out for inspirations that derive from real-life situations, or is it more a case of when you sit down to write a screenplay you start remembering things like that?

I do do that, yep, I remember being at the funeral and thinking I’d like to use that, I just had no idea when to do it, or how – but this film presented the perfect opportunity to have a funeral in a movie.

I had actually heard that before but I’d just forgotten. But actually since we shot that it’s come out of its copyright and now you can use it, but I think it worked better for us anyway, to do something that was more charming and creative and showed her as being a very warm presence in Ricky’s life, so it made it better.

How difficult can it be, to get that tone spot-on without compromising either the humour or the poignancy?

Yeah achieving that is all in the edit, and it’s why I spent a lot of time editing, and on all my films I’ve taken really long on that. On Shadows we spent 14 months editing that, and it wasn’t even that much of a mixture of comedy and pathos. But this one, finding that balance was quite important because the film is in danger of veering off into the absurd with a lot of the characters and situations, so a lot of the time we were just trying to figure out how to keep it in some sort of reality.

Is the post-production side of the filmmaking process the one you enjoy most, and the aspect that inspires you most creatively?

Actually I enjoy shooting more than anything else. The editing part is actually harder and more lonely, so I enjoy the shoot so much more.

There’s a distinctive droll wit to New Zealand comedy, which is quite self-aware, using certain sensibilities to evoke humour – have you always been aware of the quirks of New Zealanders and New Zealand culture, that could lend itself so well to comedic endeavours?

Yeah, both New Zealand and Australian humour is quite similar and we have good comedies coming out of both places that I’ve always really loved and been influenced by. The ones I’ve turned to are The Castle and another film called Love Serenade, which was a big influence on me early on.

The next big project for you is Thor: Ragnarok – I interviewed Karl Urban recently who said the screenplay is really funny and he felt it represents a new breed of superhero movie. Is that the case – and did you have to fight ensure that your sensibilities as a filmmaker and comic remain very present in the film?

No, I’ve found it quite easy and I’ve had a lot of support, everyone has been really supportive.

In regards to the tone, would it say it is comedically inclined then? What can fans expect from the next instalment in the Thor franchise?

Well I dunno, it’s definitely a mix, some of its my own stuff, so there will be lighter moments, and character driven moments, but then there’s always a lot changes to be made so I can’t guarantee anything, because we might get to the edit and think oh no, this is a musical.

Have you felt a relatively new pressure on this project? In a sense that, there are so many comic book fans that expect a very certain type of movie, not just in line with the preceding films, but their own nostalgic expectations. Have you found that to be the case? Is it daunting?

Yeah a bit, I don’t really spend too much time worrying about it or paying attention to it because you can’t be loyal to every aspect of these comics, because there are a lot of runs and a lot of issues, and some have really bad, and stupid and really ridiculous ideas and some of the ideas they come up with are so ludicrous. So someone will say ‘you’re not being true to the comics’ – but do you want me to do the issue when Thor’s mates the Warrior’s Three went shopping in New York City, which actually happened in a comic [Laughs] it’s just super-ridiculous and you can’t please everyone, so all we can do is just concentrate on what’s best for our film. It’s a movie, we’re not making a comic book and a lot of issues of the comic books wouldn’t make a good movie.

You probably can’t say, but there’s been a few rumours of late that Doctor Strange may feature… Is that anything you can comment on? Or are you sworn to Marvel secrecy?

Though contradicting myself wildly here – is it really important for that people go in knowing so little – does the constant speculation frustrate you ever?

I really prefer not to know anything about a movie before going in to it. A lot of the time I hear rumours and I think it’s just because people know the characters and the universe so well, it’s okay to drop hints and little bits of info, especially when you’re trying to pique the interest of the public, but there are certain things that are just better not to know.

Finally, this What We Do in the Shadows sequel – are the wheels in motion for that? When can we expect it to begin?

I don’t know when we’d be shooting that, we’re trying to write some ideas for it at the moment. It all depends on Jermaine and I and our schedules really, and he’s always pretty busy and I’m busy so getting us together in the same room to do some writing is hard.

Hunt for the Wilderpeople is released on September 16th, and you can read our 4* review here.

Could Bruce Campbell be playing Ash in Doctor Strange in the Multiverse of Madness?