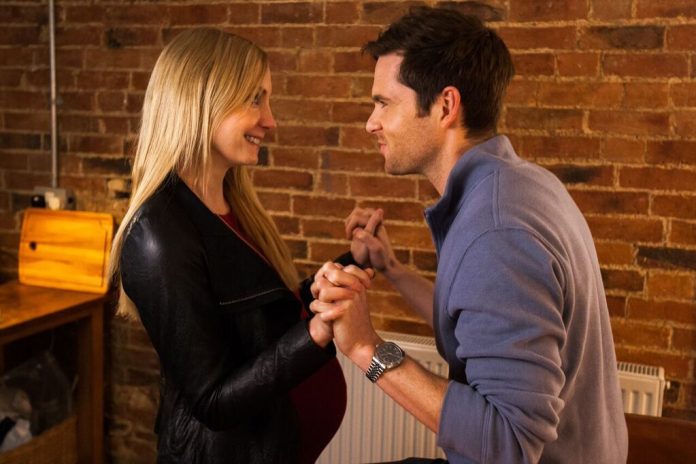 On a bitterly cold December afternoon up in the nation’s smallest county Rutland, there was a rather warm piece of cinema being shot, in Bill Clark’s affecting drama Starfish – and HeyUGuys were fortunate enough to be present on the set.

The film, which hits cinemas across the UK on October 28th, depicts the real life experiences of Tom Ray and his wife Nicola, as the former survived the rare disease sepsis, though at a cost; for the devoted husband and father of two lost his hands, legs, and even part of his face.

One of the more remarkable aspects to our journey up to the set, was to spend time with real Tom Ray, on hand as an advisor, but also as a body double to Tom Riley, who was portraying him in the movie. Though having the real victim present during the shoot added a vital injection of perspective to all involved – reminding those in the cast and crew that the triviality of a film set is nothing compared to what this poor family had to go through – it still added a pressure on the actors embodying the subjects.

“The honest answer is that no, it’s not a good pressure,” Riley told us earnestly. “It’s been tricky. You don’t want to look like you’re taking the piss or doing a parody. His kids are in the movie, it’s been hard, I won’t pretend it’s been an easy thing to do, but no matter how difficult that is, it’s far harder for him.”

“It makes it seem like every worry in your life seems trivial. Just take the prosthetics, I go into the first scene quite tired, but I’m lucky enough to take it off at the end of the day, which Tom can’t do.”

Given so much of this film has been shot on location, it has meant that Riley, in full make-up, has been going through similar experiences that Ray has to contend with on a daily basis.

“When we’ve been shooting on location, particularly kids, they point and stare at me, and one guy said to me in a restaurant, “what’s up with your face man?” and I thought, this is Tom’s life, day-to-day. People stopping and staring, or doing the other thing where they’re actively trying hard to. He lives with that every day of his life, and I’ve just had a taste of it. It’s been very humbling.”

It’s a remarkable turn by Riley, and one that is matched by his co-star – and producer on the movie – Joanne Froggart, who plays his wife, Nicola. The Downton Abbey star felt somewhat differently, however, thriving in the pressure that came from the real life couple being so heavily involved in the production based around their lives and experiences dealing with this tragic set of affairs.

“It was great having them there for many reasons,” Froggart began. “They were so candid with myself and Tom and so open, letting us ask any questions we wanted to. Getting this film made meant a lot to them, they were really behind it. You might’ve been having a day where you feeling tired, or whatever, and you look at them and think, yeah I’m not going to moan about being tired. It was a very grounding experience having them there, it really was, a very levelling experience.”

“I’m in awe of both of them. To see them share a joke, or giggle, it’s quite life-affirming. These guys have really overcome some horrendous things and are still here to tell the tale, and still together, with a lovely family. It’s incredible what they’ve achieved.”

It’s a story that director, and writer, Bill Clark has been aware of for a long time, and one that he has a personal investment in, as he explained to us when we caught him for a brief chat in between scenes.

“20 years ago I worked in a studio in Leicester with Tom and Nicola and I’d heard about this thing that happened to Tom and I was one of many people going around raising money with a whole bunch of people from the industry doing sponsored walks,” he said.

“Cut to 2010 and I went for a coffee with Nic. Then I met Tom and thought, wouldn’t it be nice to document this because they’re amazing people and their struggle was amazing. So I started interviewing them on camera, thinking I was making a documentary, but the more I thought about it the more I thought of what a fantastic dramatic story it was.”

“What kept Tom alive when 97% of people die from this? He must have some special thing. If it was the will to live, and the will to survive, then what sparked that? I realised it’s because he wanted to be a good father and a good husband, and having raised a couple of kids myself I thought that was an interesting thing to explore.”

Clark also discussed the challenges – and rewarding aspects – of having Tom and Nic around on set, and explained that he did speak to the actors beforehand about their thoughts on the matter.

“I spoke to Tom and Joanne about it and asked how they felt about them being around, because there’s far more pressure on the actors than there is on me, and they were unsure about it at first,” he admitted. “There is definitely a different atmosphere on set when Tom and Nic are on, because we’re recreating moments of their lives. It must be tougher for them than it is for us. There were certain scenes we said they couldn’t come on for. I spoke to Nic, who’s working in the art department, and asked if she was alright and she said, ‘I can handle the pictures I just can’t handle the words’, and that was interesting.”

Such was the intensity of the shoot – with hard-hitting, emotionally impactful scenes being shot at the hospital on the day of our visit, we spoke to producer Pippa Cross, behind productions such as Bloody Sunday and Vanity Fair, in her car parked outside the building, so as not to distract anyone from the job at hand. She too discusses how rewarding an experience this film was, for all involved.

“It’s inspiring,” she began. “Being around Tom and Nicola, and indeed the children who were young when the events in the film happened, and are now teenagers, that’s inspiring because Tom tried to hold his family together, that’s at the core of everything, he wanted to be a good dad and husband, and for all of that not to be stripped away from him at the same time he lost his arms, legs and dignity. It’s that fight which we, at much different levels, all go through. I felt when I read the script this was something people could relate to, and you realise it’s really powerful and yet accessible. It’s a tough old journey but it is peppered with lovely, funny moments.”

She also explained the reason to shoot the film in Rutland, where the real Tom and Nic currently reside.

“Being the old school producer that I am, you get a regional story and you instantly think, well, we could go somewhere else where they give you lots of money, like Wales or Scotland or Yorkshire – all of these options spring to mind, but actually Bill is based here, it’s a very Rutland story and one that is known to everyone here because Rutland is a genuine community. We very quickly worked out that the support and love from the community here would be worth more to us than trying to pick up everything and go somewhere else just because they also had green fields, houses and hospitals. Our location needs have been relatively simple, and it’s been a dream, and allowed us to put the money on the screen really, which is my job I suppose.”

It’s rare to hear cast and crew-members speak so passionately about the project at hand, sincerely inspired by the narrative, and absorbed fully in the project, wanting to do right by the real life Tom and Nic if nothing else. Froggart has been involved from the very early stages of development, committed to the cause in a way seldom seen, going above and beyond to secure funding that ensures this tale be told.

“I read Bill’s script and just thought it was the most amazing love story, that’s what I took from it – and the fact it was a true story, too. As soon as I read it I put myself in that position of being Nic, and that happening to my family and my husband and it’s horrific, and terrifying.”

“It has been a special shoot. Everybody who read the script really wanted to make this film, we wanted to be a part of telling this story. I’ve never been on a set like it. Tom Riley and I would get a round of applause if we did a scene that was really emotional. It felt like everyone was really behind us, and with us. We were doing it all as a team.”

One of those likely to have been applauding was director Clark, who had high praise for his leading lady.

“There was one scene Jo did and the whole crew was standing and staring at the monitors. Nobody could move,” he explained. “It was ages before I called cut because you never knew what they were going to do next, and that is the great thing about doing indie film, you can explore that stuff and take the film in different directions at the end of a scene. It’s been a phenomenal experience, intense, tiring, but just brilliant,” he finished.

Starfish is released on October 28th.