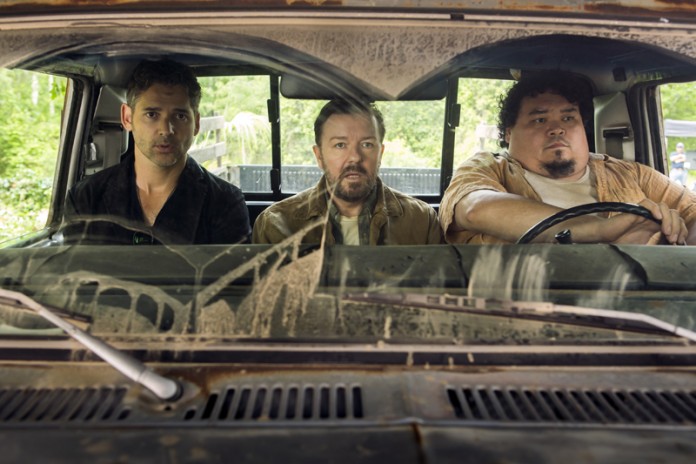 Have Ricky Gervais’ edges ever been so blunt? Where is the unabashedly sharp, vicious and cutting asides that hallmarked his presenting stints at the Golden Globes? Or the skin crawling, acute and nuanced observations of the Office??You won’t find any of them here.

Ever vocal about the virtues of Netflix, Special Correspondents represents his latest collaboration with the streaming service and, well, himself (he writes, directs and stars in this work). The net result is a breezy, but ultimately quite tepid, comedy. In fact, it offers about as much of a challenge as an open goal placed in front of a particularly goal hungry Lionel Messi.

And yet, focus falls on a topic ripe for satire; radio journalism and war reportage. Eric Bana plays the cocksure and arrogant radio journo Frank Bonneville, whilst Gervais is the hapless sound engineer, Ian Finch, who is married to the narcissistic, and altogether unpleasant, Eleanor (Vera Farmiga).

The film plays out as a clichéd genre exercise. At its heart, an unlikely duo overcome their initial misgivings and dislike over one another in order to achieve a constructive conclusion; ergo, they bond and develop mutual respect. Their course is etched over a botched assignment to war-torn Ecuador that leaves them not only in New York, but staging their own fake kidnapping in order to convince their boss, and the wider world, that they are where they should be.

The trajectory of affairs is desperately predictable. Quite why this 2009 French film has been elected for a remake is surely to be beyond anyone outside of Netflix HQ. It isn’t just the narrative that lacks character. Pumped with restless incidental music, no thought is allowed to fester without instruction (lest the audience lose interest and click onto a repeat viewing of House of Cards or something).

The candy-coated cinematography, rich in primary colours, makes a bold stake for anodyne, mass-market appeal aimed towards the widest possible market. One wonders how much coercion its director might have experienced in order to bring Special Correspondents to fruition, because in a seemingly strange case of life imitating art, it is as though Gervais has been the victim of a genuine kidnapping and produced a reduced fat/lite model of his usual output. Sadly, it lacks all the ingredients that usually make him an irresistible proposition.

So much could have been said about modern war journalism. And you half expect Gervais to be the man to provide it. Sadly, he delivers his unsophisticated clarion with all the might of someone remonstrating with an intruder by arming themselves with a feather pillow. Somewhere in Ricky’s head there is a desire to make a Dr Strangelove. The reality is that this isn’t even Anchorman 2. And this writer is a considerable fan of his oeuvre.

Special Correspondents isn’t all bad. It is amiable, but amiable isn’t enough. Amiable isn’t memorable, or thought-provoking, or interesting, or, most importantly, funny. Alas, it is as grounded as the characters’ plight. A disappointment.

Special Correspondents is available to watch on Netflix now.

Exclusive: Tony Way and Jo Hartley on the genius of Ricky Gervais and After Life: Series 2