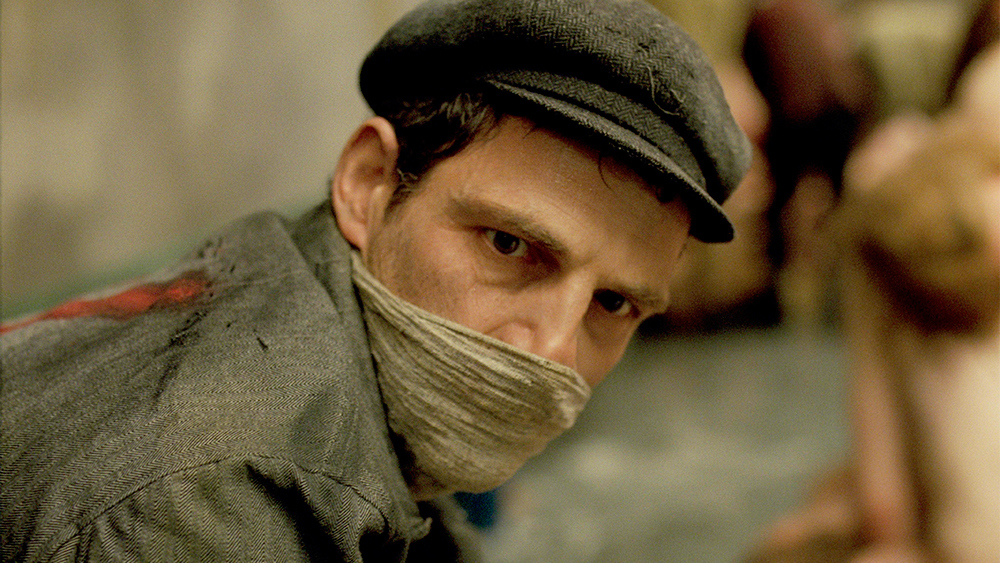 If you thought the horrors of the Nazi concentration camps had been exhaustively covered and that you’d seen everything you needed to see, from documentaries to Schindler’s List via Sophie’s Choice, then think again. Laszlo Nemes’ Son of Saul takes us into new territory, leading us a little further down into the inner circles of hell.

We follow the protagonist Ausländer Saul at Auschwitz-Birkenau: he’s a member of the Sonderkommando, the group of prisoners assigned the task of shunting victims towards the gas chambers and then clearing up the mess afterwards. The camera is often placed behind his shoulder, a second pair of eyes trailing him as he performs his infernal duties, dragging and piling up the bodies, cleaning up the shit- and bloodstained chamber before readying the next group for their final journey.

The pace is relentless. We, along with Ausländer, hear disturbing noises and glimpse horrors on all sides, but there is no time to stop and reflect. Ausländer has work to do, and we are reluctantly dragged along with him. Despite the pace, the men have time to organise black market deals and there are more serious plans afoot as a small group plans a rebellion against the guards.

In the midst of this organised madness, Ausländer comes across a young boy who has miraculously survived the gas chamber. He watches as the chief doctor finishes him off and then realises that the boy is his son. He carries the young body up to the autopsy room and begs the doctor there not to open up his child. Thus begins his quest to bury his child with a rabbinical service, a task more monumental than anything dreamed up by Greek mythologists or Dante. Will he manage to perform this seemingly impossible act? We spend the next hour and 47 minutes watching him try.

The camera work is similar to that of Birdman, as we breathlessly head from one hellish scene to another, but there is no let-up for the lead actor here, who is in every scene. Geza Röhrig is stupendous as Ausländer, conveying huge emotion in an almost implacable face. Tomas Zany’s sound bombards us with the screams, gunshots and factory noises of the camp. This is full-immersion treatment and we feel imprisoned in this stifling and disgusting place.

More than any other film dealing with the death camps, this film shares much with Vasily Grossman’s The Road, whose account of the Soviet troops liberating the camp and the survivors’ eyewitness accounts are equally harrowing and haunting.

When one of the prisoners from Ausländer’s village states that he has no child, which our hero denies, it is of little consequence. The dead teenage boy represents all those bodies, and Ausländer’s desperate attempt to give him a decent burial is a way of salvaging his own humanity and carving out some decency amidst the horror.

This is a staggering and completely devastating depiction of that horror and Nemes would be a worthy winner here in Cannes.