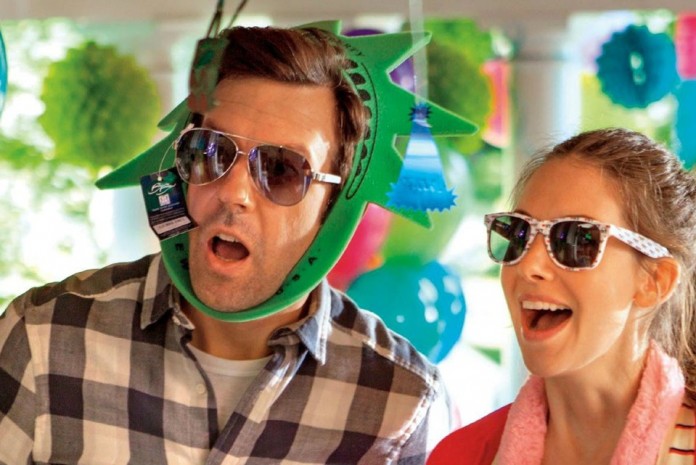 The rom-com has had an entertaining year in the shape of British gem Man Up, Judd Apatow and Amy Schumer’s magnificent Trainwreck and then there was the most hysterical and romantic film of them all, Fifty Shades Of Grey. As 2016 rolls around we are given Sleeping With Other People, a rom-com-cum-dramedy featuring anybody that has stepped foot in a black box theatre in New York to do improv in the last decade, seemingly.

Jason Sudeikis and Alison Brie are the people doing the titular act, two people who lost their virginities together then drifted away, and now whilst Brie’s Lainey is dealing with a lust for the man she can’t have (Adam Scott) and losing her fiance, Sudeikis keys into his classic role as womaniser and commitmentphobe, they find one another in the big city and try to become good friends. But as the No Strings Attached poster asked us many years ago, Can Sex Friends Stay Best Friends? (Also, Who Is Salt?)

Sleeping With Other People walks a rather strange line, as if the film was pulled over and asked to take a breathaliser, as it deviates from high comedy, a lot of it courtesy of Jason Mantzoukas in classic best-bro role (Can he become a sex friend? Sequel?) to some surprising amounts of drama, a lot of which stem from Lainey’s fascination with and hurt from a relationship/obsession with Adam Scott’s middle-of-the-road played to be dull doctor. A strange mix that seems to jumble up and makes a tonal balance that nobody can really keep in check. A shame, really, that the swerving between the two tones is a hassle, as both sides of the coin are done really well.

The film is often hysterical, Sudekis getting off some killer lines, and a scene between him and Brie involving a pickle jar and a detailed lesson on self pleasure is absolutely magnificent, similarly the depths of emotional drama and complexities of modern human relationships is fascinating, allowing career-best performances from Sudeikis and Brie who deserve a lot more chances in deeper, more dramatic material from now on. Just one shot from act three (of four) holds perfectly on playing up the journeys of both leads and where it has led them at that exact moment, and it is gorgeous, surprisingly affecting and kind-of joyous in its simple, reasoned manner.

The film, though, does go on a little longer than needed in a way that feels like writer-director Leslye Headland (Bachelorette) didn’t have confidence in an ambiguous but strong ending, and needed to key into rom-com conventions over the real and dramatic side of the feature that is playing out. As such, the last act tears down a lot of the good will of the film and acts as a need to avoid being bold, being daring, and slip into a comfortable pair of slippers after a walk in platform boots that damn well made a statement, even if walking in them was wobbly.

Ultimately Sleeping With Other People has high points of both comedy and drama, but doesn’t amount to as much as it should. A great cast full of folk well versed in being hysterical in anything they do (there’s even a brief cameo for Billy Eichner) and some really really neat beats and character work, but it trials off into mediocrity and never recovers from that. A must see for fans of Brie and Sudeikis, but there’s not enough in the film to tell the majority to rush out immediately.