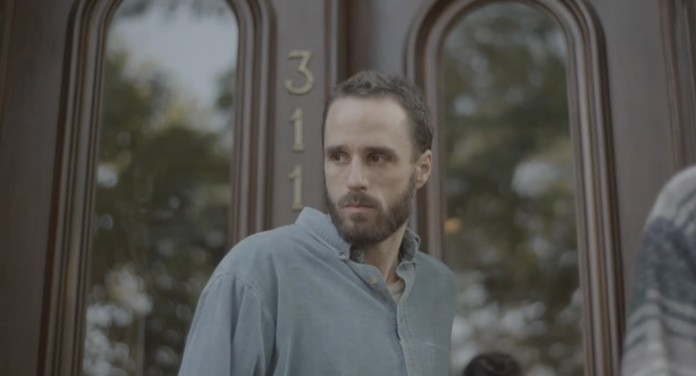 As one of the stand-out pictures that was premiered at Berlinale 2015, Nasty Baby finally gets its UK release, hitting cinemas across the country as of April 8th. We had the distinct pleasure of sitting down with the creative filmmaker Sebastian Silva, who not only directs this picture, but takes on the leading role.

He explains his decision to star in the film and just how candid an exploration this is of his own life, while also telling us of his close friendship to co-star Kristen Wiig – who he admits he hadn’t heard of before being introduced in regards to this project.

So what inspired Nasty Baby – where did this idea come from?

The main one that made me think this could become a film, was the character of the Bishop. It happened to me a long time ago, in a very gentrified area and there was this man disturbing the peace of the neighbourhood and he seemed pretty lonely but was aggressive and scary to a lot of people, mostly women. So I started having this fantasy, what would happen if I killed him? What would happen if I tried to get rid of him – would my neighbours call the police, would they help me? So I started thinking of this elaborate, perverse fantasy and it became real, because there are thrilling aspects to it, a lot of social critique, in the fact there are people out there who could disappear, and nobody would care. Also that privileged people could kill people, and get away with it.

That was the engine to create this film, and then the parenthood elements just came because I’m 35 and everybody around me is reproducing like bunnies and it’s disturbing but makes me jealous because I’m gay. How am I gonna make a baby? A lot of my gay friends are all struggling to make an idea of becoming parents, so that’s a theme in my life now, a lot of friends are going through that.

As for the ‘Nasty Baby’ side of it, it was an old idea I had a while ago where I thought I could dissolve my ego by embarrassing myself to a point of no return, by humiliating myself by acting like a disgusting baby in front of an audience, to see how far you can take that. To get through that threshold of embarrassment and come out stronger.

You seem to put a lot of yourself in your movies, and you even have your brother Augustin playing your brother in the movie…

This movie is as personal as a movie can get, that’s my apartment, that’s my cat, that’s my neighbourhood, that’s everything. I paint a lot, I used to have a black boyfriend who made furniture. There is a lot of elements in there, but elements I only stole from my own life because they serve a purpose in this specific story. I’m using a lot of aspects of my life to serve the narrative, because they fit perfectly with the story I wanted to tell. The reason I’m playing the lead is to challenge myself in a different way. I’ve made six movies now and I felt like I wanted to be challenged in a different way, and I’ve never acted before.

Whenever I had those fantasies of killing this man, it was always me doing it, so I had always visualised this as me being the person committing this crime, so it made sense for me to do it. I was lucky enough that my producers accepted the fact the lead role could be played by me, because I could’ve got James Franco, some name. Somebody that could make the film a little more commercial, but my producer let me do it, and I’m forever grateful. I enjoyed the process and result a lot more – especially the selfish experiment of seeing myself creating life and taking life away, there was something appealing about doing that and embodying that role, then to watch it and witness myself going through the motions of the character.

You have a wonderful chemistry with Kristen Wiig and Tunde Adebimpe – were they friends beforehand?

I was introduced to Kristen and Tunde by a mutual friend, Alia Shawkat, and I’m really close to her, so whoever is her friend, is my friend, because we get along so well. She knows me well enough to know that I would get along with them both too, and she was right. I met Tunde once and I told him about the movie, and I asked him, ‘Will you be my boyfriend in this movie’ and he liked it. We had similar interests and similar cultural backgrounds and we both love drawing cartoons, I thought that he could totally be my boyfriend and it would make sense for me to hang out with him. With Kristen we met on the phone first, and I had no idea who she was, and then I Googled her and I saw how fucking funny she was, just hilarious. There aren’t many people who make me laugh but she really did, and I became obsessed with her. Then we met and we got along even better, and she said yes really quickly, it was an immediate positive response.

I didn’t have much time to see the footage and that was something I didn’t consider, to not be able to see it. I’m usually really involved, always in front of the monitor. There was a real trust exercise where I had to truth my DP, who I do trust – he has a good eye for bad acting. I told him, dude, whenever I am making an asshole of myself but stop me and tell me, never hesitate – I trust you. I said the same to the actors, I said that whenever they feel I’m not doing it right they have to stop me, and I’d do the same with them. But the acting was a no-brainer, I’m playing myself. But when you’re leading a scene, you can tell when you’re fucking up or not, you know when it feels real. You’re there, and it’s not like you’re so into the character you can’t perceive whether things are working or not.

Your last couple of movies have very much been about looking at Chile from an American perspective, through a tourist’s eyes. Now, this is looking at American through a Chilean’s eyes – was that easier to write and to craft given your experiences?

I guess so, but to be honest I don’t even know what a Chilean means. What is a Chilean perspective? I feel that I’m a citizen of the world. I grew up listening to Whitney Houston and The Beach Boys and reading National Geographic and eating Cornflakes. I don’t feel like a tourist or an outsider in New York City, I’ve been there 14 years. So it happens that my character isn’t from the States but they never mention where he’s from, it’s not a theme at all. There’s very little Spanish in the movie, I tried to stay away as much as I could from Chile, because my previous two films have that theme to them, geographically at least. It would be too strong and specific to bring it into this movie, and now I think I’m going to stay away completely from that theme. Just because I’m Chilean, it doesn’t mean I want all of my fucking movies to have the Chilean theme, it feels irresponsible as an artist to keep on bringing Chile into my film if there’s no need for it.

Kristen Wiig signs up for ‘The Husbands’