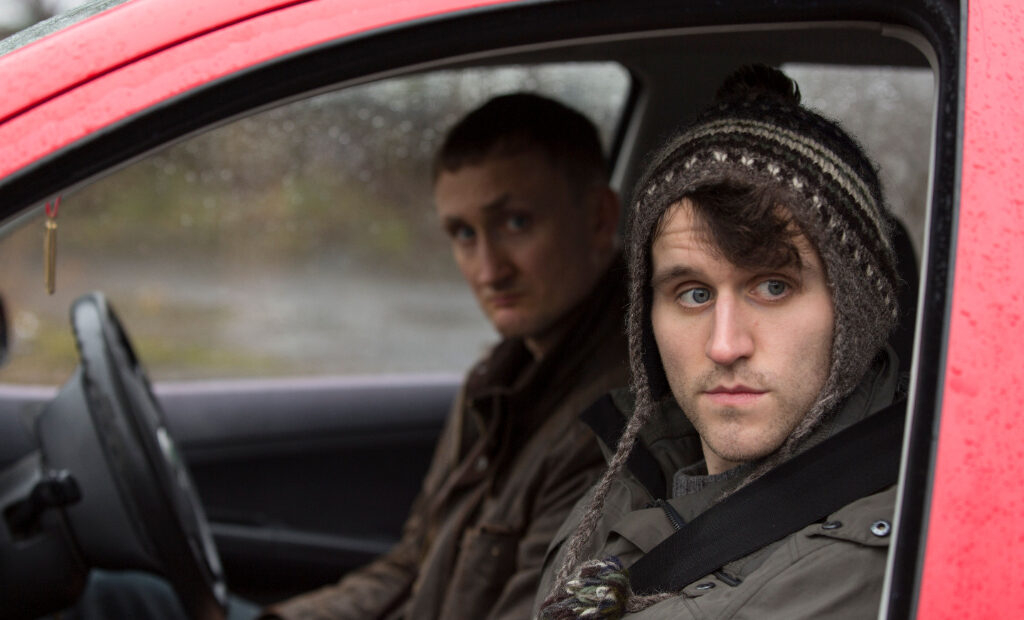 Christian extremist brothers Tim and Vic (Harry Melling and Tom Brooke) are on a mission. Sent to Ilkley in the Yorkshire dales, they have been charged with assassinating atheist writer John Huxley (Roger Allam), but a botched initial attempt which left another man dead has put a hard-nosed cop (Anna Maxwell Martin) on their trail.

There are promising ideas and a few good jokes at the beginning of this satirical black comedy. The cold open with Tim sharing a jam sandwich with the man he and his brother are about to kill is gently funny because we know that something is coming and the incongruous appearance of a male voice choir among the rolling hills, singing the score over the opening title is a funny fourth wall break. The first act continues to work fairly well after this, with Anna Maxwell Martin clearly having fun slightly overplaying the tough cop stereotype and Melling and Tom Brooke scoring some deadpan laughs as the hapless would be assassins.

Director and Co-Writer (with Jamie Fraser) Harry Michell is clearly aiming at broad satire here, casting Christopher Hitchens lookalike Roger Allam as the atheist writer, showing the extremists as both childlike and uneducated. The action takes place during a book festival and Tim, taken by one of the organisers (Vinette Robinson), asks her to what turns out to be a bible reading aimed at children. The two are shown as bumbling, easily led by Father Enoch (Derek Jacobi), and as not understanding either their religion or what they’ve been asked to do.

The problem with all of this, and with Maxwell Martin and Flora Spencer-Longhurst’s storyline as the cops, is that it doesn’t go far enough. It’s been a decade since Four Lions leaned daringly into the absurdity of extremist terrorism and next to that, and its searing indictment of how extremism exploits naive and undereducated young people, Say Your Prayers comes off as gentle to the point of having nothing to say. This also affects the comedy. The laughs here don’t build as the film goes on. For instance, with the Police, the tone is established early on and it never changes. There are likely more laughs to be mined from those performances, but something needs to shift. This is also true of the male voice choir, which Michell cuts to over and over again; the gag always the same, landing with an increasingly dull thud. I kept thinking of the way A Fish Called Wanda builds and builds in its mania (as a film and within individual sequences, like Michael Palin’s recurring attempts to kill an old woman) and wishing that Say Your Prayers had some of that same escalating comic energy.

It’s unfortunate that the film doesn’t entirely work, because there are good things here. Harry Melling’s guileless performance is funny at times, and the closest the film comes to hitting the same points that Four Lions made. He and Tom Brooke, as the more volatile and initially more committed brother, also bounce well off each other. The same is true of Anna Maxwell Martin and  Flora Spencer-Longhurst; their early scenes are some of the film’s funniest and it’s a shame the script doesn’t find somewhere to take them. At times this feels like a short stretched out to feature length. It has some scattered good ideas, a funny opening and closing, but it can’t sustain the jokes or make its points with as much force or as many laughs as it would like.