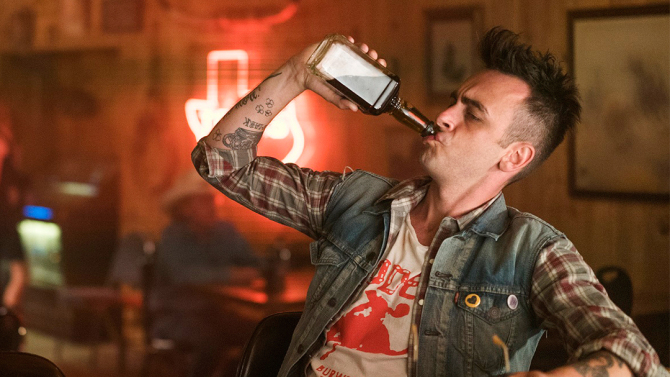 For the first fifty minutes or so Preacher is unlikely to make a whole lot of sense, doubly so if you haven’t read the graphic novels the new TV series is based upon; a 75-issue mini-series by Garth Ennis and Steve Dillon. The key difference is that the comics started slap-bang in the middle of the action with relatively little setup. In contrast the series, written and directed by Seth Rogen and Evan Goldberg, opens with an entire hour of setup and world-building without any real payoff. If not for the occasional bursts of excessive violence and gore Preacher’s debut might have fallen pretty flat. Not something that should really happen in a story that includes the fake news headline ‘Tom Cruise Explodes’.

But here we are, specifically Annville Texas, where Dominic Cooper’s drunkenly disgruntled Jessie Custer lives as the resident preacher. Though not exactly trapped in the role it is one he barely tolerates. He winces at the complaints of impotent small-town folk while seething with contempt for people who seem physically incapable of being decent. It’s little wonder that he considers giving up the profession, especially when various heads of churches are mysteriously bursting into pieces all across the world.

Meanwhile hard-drinking, hard-fighting, generally hard-living vampire Cassidy drops into Jessie’s life after jumping out of a 30,000 foot high airplane. From the get-go it’s apparent that there’s something different about this version of Cassidy, played by This is England alumni Joe Gilgun. It opens with him posing as an air steward on a drug-fuelled party plane before realising the whole thing is a trap set by religious fanatics. One of the many things you’ll have to file under ‘Important Later’ that Preacher hints at.

Speaking of which Jessie’s ex-girlfriend Tulip, played by Ruth Negga, also makes an entrance. First by stealing a map during an outlandish hit job that requires executing a man with a corn husk (when in Kansas…), then downing a helicopter with a homemade bazooka. It’s all to do with some mystery job that Jessie, shockingly, wants nothing to do with but it brings her into the picture nonetheless. It also makes it apparent that Tulip is already the gun-toting badass that her comic-counterpart took several issues to become. As with so much there’s no knowing where this will lead but for the time, Negga is clearly having a lot of fun in the role.

If this all sound a touch disconnected though it’s because it is. The heavy action with Cassidy and Tulip feel like enthusiastic attempts to spice up the dull character beats that Jessie is going through. We see him visit the members of his congregation and establish how far beyond redemption they seem to be. All while giving us the obligatory nods to future story-lines from the comic like the Quincannon Beef Company and of course, Arseface. This latter addition is one that could have been executed with horrible insensitivity. A good-natured teenage boy who became horribly disfigured by a suicide attempt so now his face resembles…well guess. Thankfully the character is well-rounded and well-performed by Ian Coletti, demonstrating someone slowly learning to live with his disfigurement but not weighed down by it.

If anyone is weighed down it is Jessie. Cooper plays the character with such solemnity that he could beat Jon Snow in a sulking contest. Fortunately there’s enough range to his discontent that it’s never boring to watch. Jessie runs the gamut of being mildly frustrated by his duties to outright disheartened by them. There’s a real sense of emptiness that only becomes apparent in a brutal bar-fight where Jessie is clearly at his most alive. Crucially though he never feels bound by his obligations, with little to stop him running off it’s hard to see why it takes him so long to try.

Before he can leave though the strange entity that’s been exploding other faith leaders enters his church and finds Jessie to be a suitable vessel. Three days later Jessie rises from the dead, or at least a heavy nap. Stranger still, people seem to obey his commands as if they were the Word of God, and with frightening literality. However none of this actually goes anywhere, never gives the episode any new sense of direction. Jessie is apparently going to use this incredible power to be a slightly less crappy priest which, as Cassidy points out, isn’t exactly a high benchmark.

Preacher’s main problem is that it’s more concerned with moving the pieces into place than actually setting them into motion. It gives the feeling that some sort of inciting incident is coming but it’s difficult to tell what or even if we’re going to care. Maybe that’s the consequence of television becoming more long-form, pacing the story gradually over several episodes rather than piecemeal.

There’s still plenty to enjoy, the characters are all fun in their own right and the action is sufficiently frequent and ostentatious for the episode to never feel boring. Rogen and Goldberg’s directorial style lends it a quirkiness that’s infused with the Texas setting. So if nothing else it has a visual all unto itself. All it really needs is an injection of energy, but we’ll soon find out if that arrives in future episodes.