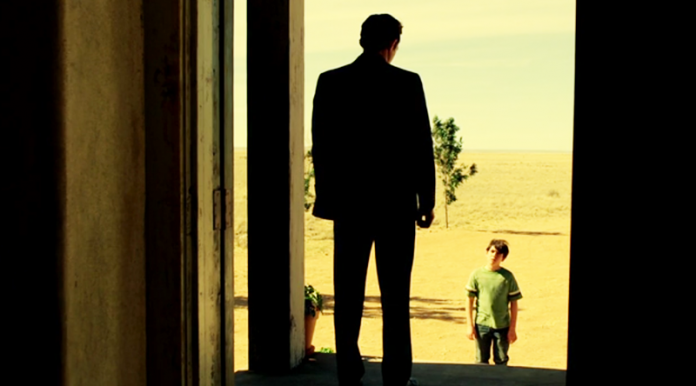 Towards the end of ‘He Gone’ there’s an awkward dinner scene with Cassidy (Joseph Gilgun) discussing his favourite pet peeve; The Big Lebowski. It probably seemed very funny to Seth Rogen and Evan Goldberg at the time of writing, watching our favourite Irish vampire rail against a popular film for lacking a coherent plot. Seven episodes in though and the rant doesn’t provoke laughter as much as derision; people in glass houses, and all that.

Yes we are now coming towards the end of Preacher’s 10-episode run and we are still stuck with filler episodes where little of consequence happens. If ‘He Gone’ does accomplish one thing though it’s advancing the case that Jesse (Dominic Cooper) might actually be the villain of this tale. At least if his reaction to condemning poor Eugene to Hell is anything to go by. One brief look of mild horror and confusion before opening the doors for church service (well, it is still Sunday). Strangely enough it’s Cassidy, a guy who’s chainsawed his way through angels, who seems more horrified at Jesse’s actions.

At the very least Jesse recognises that he’s gone too far. Whatever he had planned to use Genesis for isn’t going to happen. Leaving him once again with enormous power and lacking any idea what to do with it. So with Jesse having little to actually do we must contend with more tedious flashbacks to his childhood, including the brief time Tulip lived with them before child services took her in. It tries to play it sweet, paying lip-service to their ‘Until the End of the World’ level of affection but these two kids just don’t have the skills to pull it off. Jesse and Tulip’s (Ruth Negga) love for each other is supposed to be a raw and volatile force driving them together, something you just can’t do with a pair of ten-year-olds.

Tulip herself is getting more focus than usual; having to rush home to immediately tend to her drunken uncle. All while her neighbours give her the stink eye. There’s a recurring theme of Tulip and her family being unwelcome in Annville which seems like Preacher might finally touch on the racial divides in its Texas setting. Unfortunately this doesn’t go anywhere beyond driving Jesse and Tulip apart. She’s tried appealing to Jesse’s wild side before, now she seems willing to work her way into his domestic life. All she gets for it is rejection though and at the end she seems tired of trying.

Cassidy however wants to hash out the business with Eugene. Jesse resists, pretending not to know what he’s talking about, until Eugene’s father comes by looking for the kid. He’s unrepentant though, telling Cass that the kid deserved; having put Tracy in her coma with a shotgun before he turned it on himself. It’s a revelation so head-slappingly stupid it makes you want to scream. Adding a dark dimension to a character generally portrayed as innocent is all fine and well. However to do it off-screen defies good-storytelling and to go to such extremes defies straight-up logic. If Eugene attacked someone with a shotgun he’d likely be stuck in a juvenile detention facility and that’s if the sixteen-year-old isn’t tried as an adult.

Cassidy responds with an ultimatum, taking off his hoodie and walking out into the sun. He knows he’s a damn sight worse than Eugene so if Jesse is really convinced of his actions he’ll let him burn all the same. We’ve seen Cassidy burn a few times before but never with this much detail; the hissing sound effects and slow blistering of his skin bring home the scene’s drama even if it is briefly. Whether Jesse lets him burn or not is left ambiguous though it would do the show a major disservice to lose one of its best characters this early.

Regardless of the outcome Jesse is visibly shaken by the incident. He kicks Tulip and Emily (still doing nothing of note) out of the church. Later he is seen pulling at the floorboards, calling on Eugene to come back, but with no such luck. Everything seems to be mounting up against him now, even Quinncannon is taking up arms. By his reckoning he won the bet with Jesse and is now looking to take the church with deadly force if needs be. In the final few moments we also get a flashback to Jesse’s father being shot, a scene virtually ripped from the comics. However it chooses to hide whoever is doing the shooting; Rogen and Goldberg likely hedging their bets for the second season (now confirmed by AMC).

Suffice to say Preacher is failing to build on the goodwill it generated when the show first debuted. The anarchic energy and look has degraded over time to the point where the series resembles a fairly stilted human drama rather than a modern day western poking fun at Christian myth. Granted the high concept, Heaven and Hell showdowns, overblown gunfights and general insanity of the comics is a bit much to ask on a TV budget. However if Preacher is to continue it needs to get its groove back before the first series wraps up.