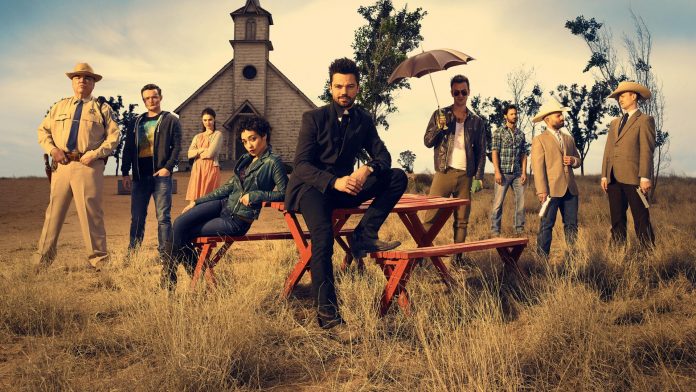 Well, that’s one way to end a season. After a rocky start ‘Call and Response’ doesn’t so much tie up the shows loose ends as beat them to a pulp and blows them to smithereens. Tulip (Ruth Negga) gets both her revenge and her man back. Jesse (Dominic Cooper) gets his final sermon and the chance to summon God and in doing so is able to finally turn his back on Annville and his precious church. Ending in such a way to satisfy both those who have been following the show and long-frustrated fans of the comic.

Before that though we open with the town in a fever pitch at prospect of actually meeting the Alpha and Omega. Jesse is still on the run, Cassidy (Joseph Gilgun) is in Sherriff Root’s jail and Tulip is riding back to town with fire in her heart and Carlos in her trunk. The whole Carlos problem is suitably fleshed out with the reveal that, when he betrayed them in Dallas it caused Tulip-pregnant at the time-to lose her and Jesse’s baby. Yeah it feels tacked on but it does ultimately help sell the drama in a scene that’s all about deciding not to kill someone. She and Jesse settle on beating his face in, though they’re fair about it; giving him a gun to defend himself. Sharply-written, funny and driven by two deeply conflicted characters this was one of the best scenes in a standout episode.

Eventually Sunday rolls around and the whole town is in attendance. Even Root, though he’s not there for service, he just wants answers about Eugene. The pacing in the church builds the tension up subtly as Jesse works at getting the phone to contact Heaven. From the grisly application of angel hands to the hollow ringing. At first it looks like he might fail, but then the sun goes out. A 2D-image of God ripped straight from Monty Python and The Holy Grail appears before the congregation. White (as Tulip suspected), bearded and old, sat upon a golden throne, God presents himself to the people of Annville. If his appearance, from the clichéd appearance to the platitudes he spouts seems terribly spurious it’s because it is. He’s a fake and Jesse calls him on it, using Genesis to get answers. Compelled the Angel tells him God is missing, Heaven doesn’t know where he is, no one does. From off-screen others drag him away and the call ends.

When the light comes up on Jesse he’s seen enough he walks out of his church with Tulip and Cassidy in tow. Leaving Quinncannon free to dismantle the place. The rest of the town sink into equal parts despair or resolve. Emily assures her kids that they don’t need God and never did, Quinncannon returns to his God of Meat. All the while the methane reactor underneath the meat factory has been building pressure all season and now it’s time to blow. The Cersei Lannister approach to plotting is still a new one but an effective one. Destroying all of Annville, it’s citizens and Jesse’s church in one dramatic blast.

Not Jesse though, he’s safe outside of town. Now that he knows God is missing he’s going to find him and make him answer, for real this time. So we end with the prospect of following the comics; going on an epic, violent, sexy road trip across America in search of God. A notion to excite Cassidy, Tulip and the audience. This also resolves the conflicts which have put Jesse and Tulip at odds; with Jesse no longer out to serve God or his flock he can comfortably give into temptation. It’s a long, lingering kiss that will satisfy any frustrations we may have had about these two.

Preacher has had a bumpy start. A first season that took far too long to develop any real sense of story developing. These last few episodes though have really pulled things back from the brink. Allowing the show to be its own, unique creature that simply carries the spirit of its source material. Boding well for season two.