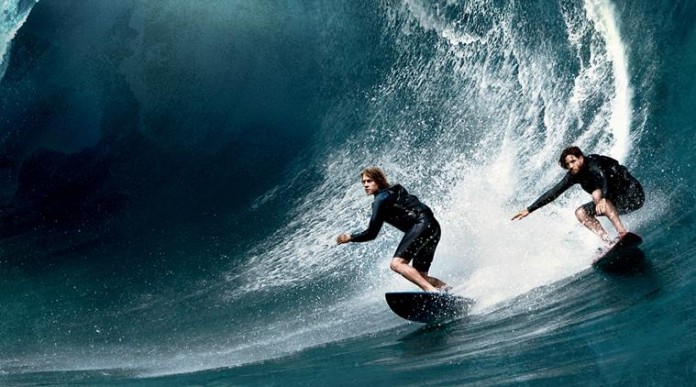 There has already been much scrutiny over the need for Ericson Core to remake pioneering action thriller Point Break, released in 1991 and starring Keanu Reeves and Patrick Swayze. All this endeavour does is point to a lack of originality and innovation within Hollywood – but alas, it’s only fair to give this picture a fair treatment and to critically analyse it as a standalone production of its own right. But even when doing so, you’re left to agonise over a clumsy and inane thriller that does nothing but enhance the notion that this truly was a superfluous task.

Luke Bracey plays Johnny Utah, a renowned daredevil thriving in extreme sports and attempting unchartered, dangerous feats for his online channel. But after seeing a colleague die during a stunt, he decides to pack it all in, and he becomes an FBI agent. Following a string unprecedented heists, conducted by a group of masked extreme sport athletes, Utah’s boss (Delroy Lindo) believes his new employee is the perfect candidate for the task, and sets him off to France, where he is to meet fellow agent Pappas (Ray Winstone) and begin a candid, undercover investigation. Utah’s plan is to join this elusive collective, run by Bodhi (Edgar Ramirez), and attempt to take them down from the inside.

Though the stunts are breathtaking in parts (it’s certainly the one selling point to this production), after a while they grow tedious, following the same repetitive formula throughout. This is by no means a dramatic, enriching piece of cinema, more what you would expect had you just (accidentally) tuned in to an extreme sports channel. The dialogue in between stunts is cliched and predictable too, while there’s even a Nicholas Sparks-esque romantic narrative sandwiched in the middle of it all, between Utah and Samsara (Teresa Palmer).

Bracey perfectly encapsulates the film’s desire to focus all of its energy on stunts, and disregard any sense of nuance or emotionality – as he is perfectly accomplished in the big set pieces, but hasn’t an ounce of subtlety to his demeanour. Thankfully Ramirez impresses, with an almost sadistic grin on his face, complete with a ruthless edge and sense of unpredictability, which the character needs. He has an adventurous, playful nature, and at the same time a hardened intensity, allowing us to fear him and believe in his endeavour to complete this set of 8 near-impossible tasks. Core also blurs the line between good and evil, as the villains are not your archetypal antagonists, they see themselves as renegades, serving a political purpose, not just gratuitously violent.

But that said, we still have no comprehension as to why they’ve committed their lives to danger. Similarly to Everest, we struggle to fully appreciate why these men put their life at risk. For what? It doesn’t help that our entry point is also that way inclined, as we don’t even have the benefit of understanding this world through his naivety. As a result we have no emotional connection with these characters, nor do we care whether they survive or not. Considering they’re persistently, and perilously, dancing with death – it proves to be rather detrimental to our experience.