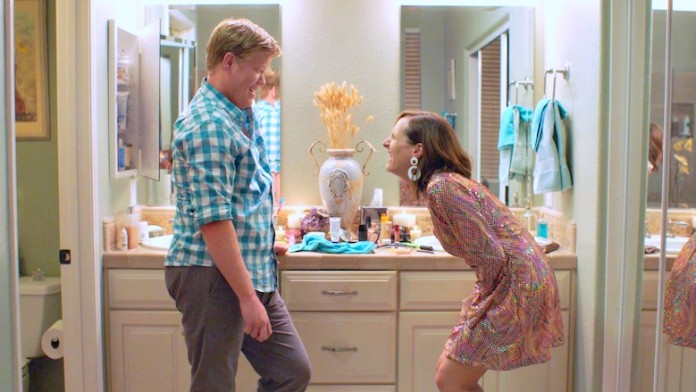 Other People was written and directed by Chris Kelly and marks his feature film debut. Kelly has worked with Saturday Night Live as a writer since 2011 and has experience working with the improv comedy troupe Upright Citizen’s Brigade in L.A. and NYC.

Other People is largely an autobiographical depiction of Kelly’s life. It stars Jesse Plemons (Breaking Bad, Fargo, Friday Night Lights) as David, a writer in NYC who travels back home to Sacramento, California to be with his Mother (Molly Shannon) who is suffering badly from terminal cancer.

Kelly lived through this situation himself. And it is obvious through the writing and direction. While the subject matter seems very heavy, and it is, he weaves hilarious comedy before and after every gut punch of emotion. That is what made this movie work so well.

There have been many Sundance films that deal with similar subject matter, two from last year alone, Me and Earl and the Dying Girl and James White, dealt with a young male who serves as a pillar of strength for a cancer ridden girl or Mother. But, Other People relies on the comedy and light heartedness as you join the family journey, it refrains from beating you down with sad scene after sad scene which can become exhausting and overwhelming.

Molly Shannon is a revelation in this film. The actress known mostly for physical comedy and outrageousness from her Saturday Night Live days had a wonderful dramatic role last year in previously mentioned Me and Earl and the Dying Girl, but in this film she stuns as the dying Mother. She is as hilarious as she is heartbreaking. Your heart aches with every scene that passes as the cancer takes hold.

But this film works because of Kelly’s script and the character of David played by Plemons. It would have been easy for Kelly to write a sympathetic character who has the world crapping on him as he tries to be strong and fix the world and his Mother. But honestly, David is a very unlikely protagonist who comes off extremely selfish and complicated. A lesser actor would have had me tuned out after the first 15 minutes, but the complexity Plemons brought to the role gave David the layers of someone you can sympathize with. Humans aren’t perfect, and David is far from perfect, but in the end Plemons played someone real and often times in a film that deals with such heavy handed subject matter you tend to lose the humanity and realness. This film never wanders into melodrama and thank goodness for that.

If this film gets a proper release and people see it J.J. Totah will become a megastar for his show-stealing performance as Justin. For anyone reading who is reading this I will do you a favor and leave it at that.

Other People was a fantastic way to start off Sundance. For director/writer Chris Kelly this was an incredible debut and at the end of the day he and this film is a perfect reflection of what the Sundance Film Festival is all about.

“Something’s going on with Lucas!” new trailer drops for ‘Antlers’