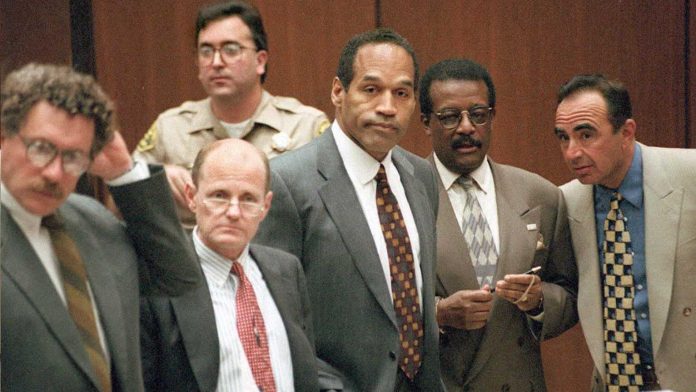 We are 58 minutes into Ezra Edelman’s?O.J.: Made in America?and the screening room of the Soho Hotel – marked by a hushed, prayerful atmosphere – is as still as a church; all 15-plus guests invited to review the film rapt and hopeful in spite of ourselves, watching on as a 26-year-old O.J. Simpson – the lithe and elegant Buffalo Bills running back – is on the verge of writing his name in the NFL record books.

Swaying and swerving past the onrushing traffic of the Jets defence, Simpson – big as a Buick, fast as a Ford Pinto Pangra – is an impressive hunk of machinery. Veering right through his opponents, he picks up the pigskin and races for the 2,000 yard rush record – reaching for the unattainable, straining for greatness; filling all of us in the expectant screening room with a surprising feeling of numinous – the feeling we are watching – reliving – something special; watching a man transfigured – seeing a god do something godlike.

It is easy to forget that at his peak, at his athletic best, O.J. Simpson was a force of grace and agility; a hulking 6”2, 210 pound danseur in cleats and shoulder pads – a stunning combination of nimble brilliance and explosive speed. He was – as the film director, Peter Hyams, puts it – the gridiron Baryshnikov. Edelman’s film, recapturing that eventful evening in December 1973 – arguably the greatest game of Simpson’s career – reminds us of the man’s sporting prowess; his ability to cut through opposing teams like a rapier with striking thrusts of movement. So uncanny was his speed and technique on that fateful record-breaking night, everything that he did just seemed magical – his performance on the biggest stage of his life akin to that of a magician’s; the superstar back gobbling up the yards with the mind-bending showmanship of John Henry Anderson pulling a rabbit from his hat.

Watching that scene (like many others, most of them of a completely different tone, being tragic, devastating and downright gruesome), watching news reports of the shooting of Eulia Love, footage of the brutal assault on Rodney King and seeing Jim Brown, Kareem Abdul Jabbar (then Lew Alcindor) et al take an anti-draft stand alongside Muhammad Ali against the Vietnam War, drums home the fact that this captivating mini-series is much more than a dramatic retread of a superstar’s fall from grace; it is a historical document – a bold recounting of America’s recent past. Being so good, so poignant and profound, Edelman’s documentary feels historic in itself. A startlingly moving and educational piece of work, it too attains a certain greatness; taking on classic dimensions – or, at the very least, something approaching it.

There is so much to be said about Edelman’s five-part series, but, ultimately, only one conclusion to be made about the quality of the documentarian’s latest project: it is shockingly good. The effectiveness of it only surprising for the fact that O.J. Simpson’s life and story is so ubiquitous we’ve almost become desensitised and indifferent to it – numerous documentaries, a maze of conspiracy theories and a popular Fox anthology series leaving us feeling all too familiar with the subject matter.

Edelman disabuses us of any sense of familiarity with?O.J.: Made in America, distinguishing his film?as at least a cut above every other Simpson narrative by painting a complex, layered portrait of the man – touching on the grisly, the glamorous, the personal and confounding. The very fact that this review begins by spotlighting Simpson’s genius – even acknowledging it – considering the weight of evidence stacked against him; evidence that strongly suggests – indicates – the former footballer savagely murdered his ex-wife (after years of brutal domestic abuse) and a 25-year-old waiter from Cook County, Illinois, tells you everything there is to know about the mini-series. This is a documentary that takes a cold, honest, and unflinching look at a divisive icon, and attempts to present him as he was; as he is – showing up the good, the bad and the ugly.

Opening up with long lingering shots of the vast stretches of desert leading up to Lovelock Correctional Center – where Simpson is currently serving a nine to 33-year jail-term for armed robbery – the documentary immediately sets about telling us that this is a film about a man’s journey; about the course of a nation’s history. Featuring interviews with the likes of Steve Lehmer, Simpson’s USC teammate; Joe Bell, his childhood friend; his cousin, Dwight Tucker, and the defence and prosecution teams of his infamous ‘94 trial; the five-part series charts O.J.’s life, tracing his every step from the Portero Terrace projects to affluent Brentwood. In doing so, the documentary portrays Simpson as complex and multidimensional – both beauty and beast – providing a Rash?mon-like array of perspectives that Akutagawa would be proud of.

What makes?O.J.: Made in America?truly masterful, though, is the context the documentary provides. The O.J. Simpson story is as much a tale of race and identity, as it is one of sporting success; a narrative of celebrity and its pitfalls, and a bloody tragedy. It would be nigh-on irresponsible of Edelman to tackle Simpson’s life without addressing the racial politics of 1960s America. Edelman’s documentary does just that, wrestling with the subtext of historic, systematic discrimination – discrimination which draws parallels to the all-too relevant and prescient matters of racial profiling and police brutality dominating headlines today. In the wake of Anton Sterling and Philando Castile’s deaths – among others – Edelman’s film resonates in ways some might find all too apposite and painful. The mini-series compels us to contend with these issues, just as it forces us to face up to the bloody murders of Nicole Brown-Simpson and Ron Goldman and consider whether justice truly is for all.

Fittingly, the poster for?O.J.: Made in America?depicts the infamous Isotoner glove found at the scene of Brown-Simpson’s murder splayed in the colours of the American flag; the proud red, white and blue of the star-spangled banner dripping off it as thick as blood. This image encapsulates Edelman’s film; the documentary showing how Simpson’s life – his rise and fall – has not just bled into the American consciousness, but become – by its very nature, its very essence – a tragedy as American as the famous stars and stripes. As the producers and executives at ESPN are keen to stress, this truly is event TV. It mustn’t be missed.