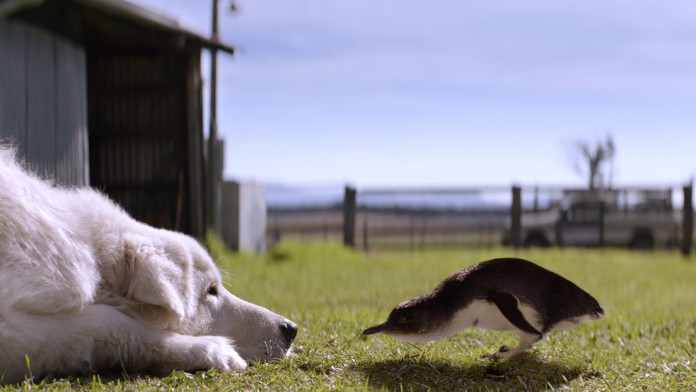 There was an underrated, Australian comedy entitled Red Dog, which hit screens back in 2011. Tongue-in-cheek and gloriously deadpan, the Kriv Stenders endeavour was a charming, unexpected joy – and much of the same can be said for Stuart McDonald’s Oddball and the Penguins, another dry-witted, Australian picture with a dog in the title role. It’s a niche market, certainly, but a surprisingly entertaining one at the same time.

Oddball is the misbehaving pet of chicken farmer Swampy (Shane Jacobson), and though a nuisance around the local area, could prove to be something of a hero – when it transpires he could be the key to keeping the diminishing penguin population safe from the preying foxes. There used to be thousands of penguins on the island, but now down to mere double figures, if that drops below 10, the sanctuary will be closed once and for all, and Swampy’s daughter Emily (Sarah Snook) will be out of work. But with her daughter Olivia (Coco Jack Gillies) determined to keep the family business alive, they decide to have one last throw of the dice, in the form of a big, fluffy white dog who they feel can solve all of their problems.

Though aimed at a younger crowd, the distinctively deadpan wit that is prevalent ensures there’s enough in here to appease both parents and their children alike. The line ‘that fart would make an onion cry’ is emblematic of this notion. Based on a true story, Oddball and the Penguins does veer into mawkish territory at times, but remains on the right side of sentimentality for the most part, managing to be heartfelt without being overbearing in that regard. The young Gillies is the epitome of this, as her performance – combined with that of the eponymous protagonist, Oddball himself – do little to support the ‘don’t work with kids or animals’ industry cliché, as they’re the best thing about this piece. Well, them as Alan Tudyk, who plays Emily’s boyfriend Bradley.

In spite of the charm and enchantment that exists, however, to call this picture undemanding would be something of an understatement, and even during the more dramatic sequences, tedium does kick in. There’s plenty to be admired, but at times we do adopt the same demeanour as Oddball, who spends the entire film looking like he’d much rather be somewhere else.