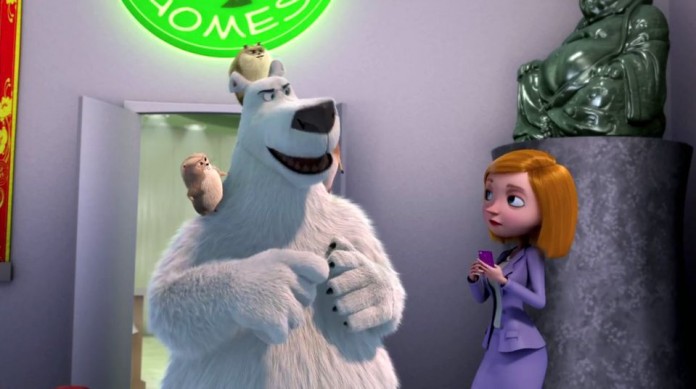 Given all of the damage our generation is doing to the planet, at the very least we can attempt to teach better morals and practises to the next one, and where better to promote such positivity than through cinema? It’s an approach we’ve seen taken in the likes of Wall-E, The Lorax and more recently, the live action production Tomorrowland. The latest to join the list is Trevor Wall’s animation Norm of the North. Though the message is undoubtedly a strong one, and you can’t begrudge a movie preaching such a pertinent ideal, it doesn’t then automatically qualify as being a worthwhile endeavour.

Polar bear Norm (Rob Schneider) has a rare gift; the ability to converse with humans. Something he’s not able to put into practise very often, but when learning that a development company – led by the nefarious, conniving Mr. Greene (Ken Jeong), plan on building properties in his Arctic home, he realises it’s a skill he had better get used to using. But not out of choice. Wanting to avoid people invading his home and destroying the land, he comes up with an ambitious plan; to pretend to be an actor wearing a bear suit, and become the face of the advertising campaign for Mr. Greene – all the while taking the organisation down from the inside, hoping to let the potential investors know of the developer’s careless, unethical proposition.

In spite of the positive message on the preservation of the wild, the film falls short in the supposedly comedically inclined moments. Having to wait lengthy periods of time to actually find anything remotely funny, this is only a real problem given how hard Wall’s endeavour is vying for humour, failing miserably in the process. It just feels so contrived in its execution, epitomised greatly in the inclusion of three lemmings that travel with Norm to New York. Patently inspired by the Minions in the Despicable Me franchise, or even the elves in Rise of the Guardians, it’s such a desperate attempt to mimic other devices that have served more accomplished animations, pointing only to a distinct lack of originality.

The indelible vocal talent of Bill Nighy helps, as he joins a stellar collective, also consisting of the likes of Heather Graham, Colm Meaney and James Corden – but they’re let down by the jarring animation style. Though it’s impossible not to take the budgetary limitations into consideration, the lack of detail to the humans, the backdrop, or even just the fur on the eponymous protagonist – work against the film, emblematic of an underwhelming title that struggles to compel the unlucky viewer.