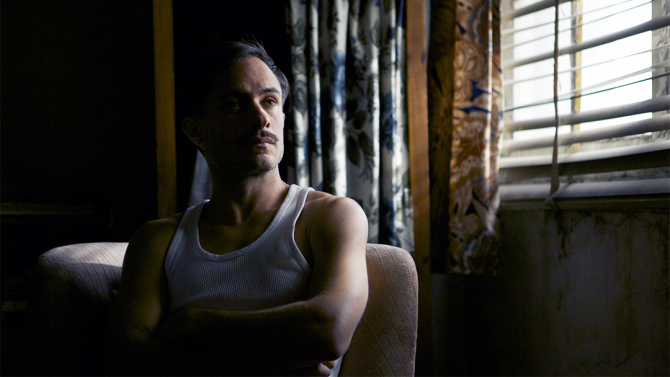 Pablo Larrain is no stranger to Cannes, and is here with Neruda, following on from his widely-acclaimed No (2012) and Post Mortem (2010). As with his previous films, Larrain contends with political conflict in Chile, a history which no doubt will provide fodder for further movies by this increasingly brilliant director. This time he focuses on the eponymous Chilean poet’s escape from the clutches of the authorities in 1948. However, anyone expecting a straightforward biographical account will be in for a surprise.

The film’s opening scene takes place within the men’s toilets of the Chilean parliament. As senators take a leak, or wash their hands, members of the house debate, take the floor and fling insults. Neruda (Luis Gnecco) calls this bathroom the “shitty” parliament, which pretty much sums up the Chilean government in 1947. When Neruda publicly denounces the violent actions of President Videla (played by Larrain stalwart Alfredo Castro) it is only a question of time before his arrest warrant is issued. Police inspector Oscar Peluchonneau (Gael Garcia Bernal) is placed in charge of the manhunt at the behest of Videla himself. And thus the chase is on, with Neruda and his Argentinian wife Delia (the excellent Mercedes Moran) playing hide-and-seek with their pursuers.

While this sounds pretty straightforward on paper, on screen Larrain has concocted something far less simplistic. For starters we have a voiceover narrated by Peluchonneau and although a man of this name was a police chief in Chile our man is pure fiction. Bernal’s detective tries to emulate Hollywood detectives of the age, and in his version of this story, he is the hero, not his prey, and his self-importance is both pathetic and comical. And in case the audience were wondering just how much of the story is based on fact, Delia puts us and Peluchonneau straight. She lays out all their future story-lines in an intimate and surreal scene and explains that he is a character invented by Neruda long before the manhunt began. Yet of course this is the work of Larrain and screenwriter Guillermo Calderon and thus we have layer upon layer of storytelling.

Then there is the colour of the film: steeped in pink, it resembles an old Kodak photo print. Director of photography Sergio Armstrong has created an incredible visual world that takes us from the hedonistic parties of the intellectuals and artists who made up the communist party to the startling foothills of the Andes. There is also an incredible use of artificiality in the film, including the numerous scenes in cars, which are deliberately conceived to look like they are straight out of an old movie. And it doesn’t end there; people start a conversation in one place or position, then flit magically to others, or the camera angles simply change slightly, always shifting our gaze and keeping us on our toes.

Larrain’s Neruda is a fun-loving champagne socialist and this is no hagiographical study. When he and his aristocratic wife are moved to a safe house, their slovenly ways are noted. Claiming that cleaning is bourgeois, the reality is that neither of them have had to clean up after themselves for years. When an admirer asks Neruda for an autograph, she also asks if – when in power – the communists will be communists like him, or communists like her.

Throughout the film Neruda comes across the ordinary people he is supposed to represent and defend, and we see this spoilt “prince” reassessing his principles. And what a performance from Gnecco as the poet. He is charming and false, playful and deadly serious. If you haven’t read Neruda before, you will want to grab a copy after seeing this dazzling film. It’s just a shame it wasn’t in competition.

Jennifer Lopez stars in teaser trailer for ‘The Mother’