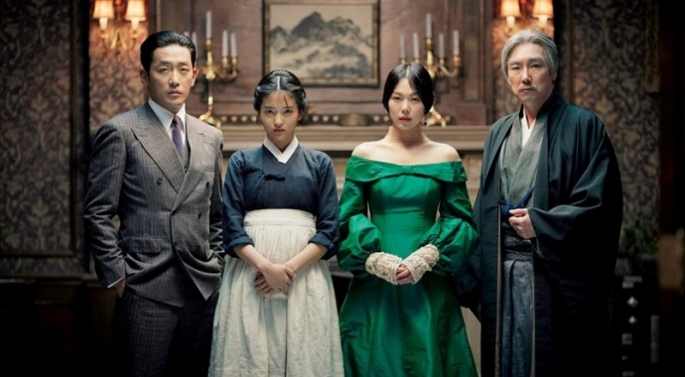 Park Chan-Wook has transposed Sarah Waters’ novel Fingersmith about a Victorian-England pickpocket to 1930s Japanese-occupied Korea and in doing so has transported audiences in Cannes. Far from suffering from its (time) travels, the story adapts perfectly to its new setting.

An orphan girl, Sookee (Kim Tae-ri, making an astonishing debut), has been brought up by forgers and petty thieves after the hanging of her thieving mother. When the Count (Ha Jung-woo), who is in fact a petty criminal and the son of a farmer, drums up a plan to marry a Japanese heiress and then dump her in a mental hospital, he picks Sookee as his accomplice.

The idea is for Sookee to become the heiress’s handmaiden and to sing the Count’s praises when he comes a courting. So this country girl heads off to the home of Kouzuki (Cho Jin-woong), a black-tongued widower and bibliophile who is the heiress Lady Hideko’s (Kim Min-hee) protector and possible fiancé. Yet all is not at is seems on this isolated estate, and we soon discover that it’s not just the petty thieves who are masters of artifice and disguise. Nobody is quite who we think they are, and secrets lie behind closed doors and in dark basements.

Park Chan-wook has moved the action to his native Korea, but the sensibilities of Victorian England are very much evident. Kouzuki’s residence is a Gothic mansion standing alongside another wing which is in traditional Japanese architecture. The mansion looks like something straight out of an Elizabeth Gaskell novel, from the wallpaper to the portraits hanging on the walls. And when one of the secrets of the house is revealed, it depicts a group of men in white tie and tails getting their rocks off listening to erotica being read to them. Again, wafts of 19th-century Britain linger over this scene, these repressed men so like their Victorian predecessors.

This period piece is new territory for the Korean director, after his explosive Oldboy and sinister Stoker, but he is to the manor born. The film looks wonderful, from the verdant setting of the estate, to the buttons and bows on the women’s clothes. He gazes upon every detail as lovingly as the sadistic Kouzuki gazes upon his books. In particular, the camera lingers on Sookee’s face, which registers every change of heart. Both of the lead actresses are incredibly beautiful, in very different ways. Newcomer Kim Tae-ri is all rough around the edges innocence, while Kim Min-hee exudes a sadness and sophistication. When they come together, they are a quite a couple. And the male leads are no slouches either: Ha Jung-woo as the unscrupulous Count embodies the hard-boiled lack of sentimentality required by a conman, while Cho Jin-woong is repellent as Kouzuki.

Although this story is incredibly sensual with some highly-charged sex scenes, one outstanding aspect is the film’s humour. Much of this comes from scenes involving the two tricksters, communicating with the briefest nods and gestures, like two kids fighting silently behind the adult’s backs. Park Chan-wook has created an elegant, luscious world full of trickery and subterfuge. It is also a rare world in which the women come out on top, fighting hard against the constraints of male domination – and when the domination is at these levels, the tricks to escape it are far from petty. This is a sexy, funny, exciting film that is a beauty to behold.