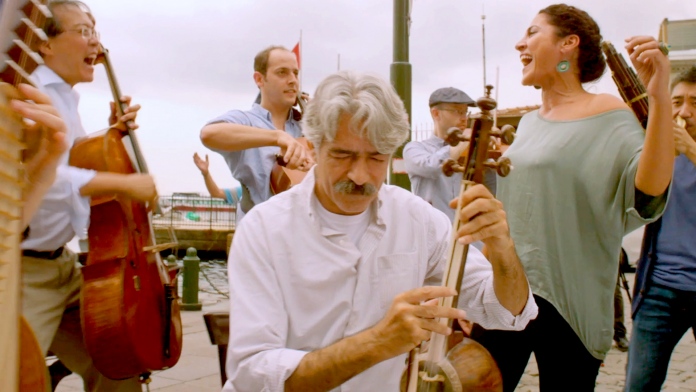 Two years ago Morgan Neville was an Academy Award winner with Twenty Feet from Stardom, a film which used music as a prism to explore society, culture and politics – which he has sought to emulate with his latest offering The Music of Strangers. Though undoubtedly achieving all of the above, what transpires is a film lacking that certain spark, and the ability to sustain a viewer’s engagement for the entirety of this feature length documentary.

Our story centres around the renowned, multi-Grammy winning (18 in total) cellist Yo-Yo Ma, who was behind the conception of The Silk Road Project, assembling a collection of some of the world’s most resourceful, talented musicians, from a host of different cultures and backgrounds. Including the likes of Chinese pipa player Wu Man, to Spanish bagpiper Cristina Patp. Also among the ranks are Syrian clarinet player Kinan Azmeh and the Iranian Kayhan Kalhor, a virtuoso on the traditional instrument the ‘kamancheh’. Between them comes a myriad of conflicting styles, and while initially many doubted whether this ambitious endeavour would work, the millions of records purchased, and sold-out concerts around the world, would suggest it’s been something of a success.

Essentially this film thrives in the positivity it preaches, about the universality of music and how we can all connect through the very medium, and somehow Neville manages to do so without veering into mawkish territory, which is no mean feat. The film is lacking conflict however, and while the latter stages are made up of the political turmoil that takes place in the home nations of many of the musicians, such as the ongoing devastation caused in Syria, or the fact that Kalhor is unable to remain in his native land of Iran where the freedom of creativity is stifled, it takes a while before such drama occurs, and the sheer affability and community spirit amongst the collective doesn’t allow for much drama. Though refreshing to see and hear, it isn’t particularly compelling. Regrettably this causes a tedium which lingers over this movie that makes for a film that simply doesn’t sustain its running time, as you can’t help but long for the closing credits.

But then, to have such positive vibrations, through both the dialogue and the kindness and endearing quality of Yo-Yo Ma – who works as something of a narrator within this feature – is hard not to appreciate. This is particularly important given the pertinency of recent issues in the United States, where prejudice is rife, and The Music of Strangers serves as something of an important reminder of what cultures can achieve when collaborating. A sentiment that is important to remind ourselves of, particularly in the current climate.