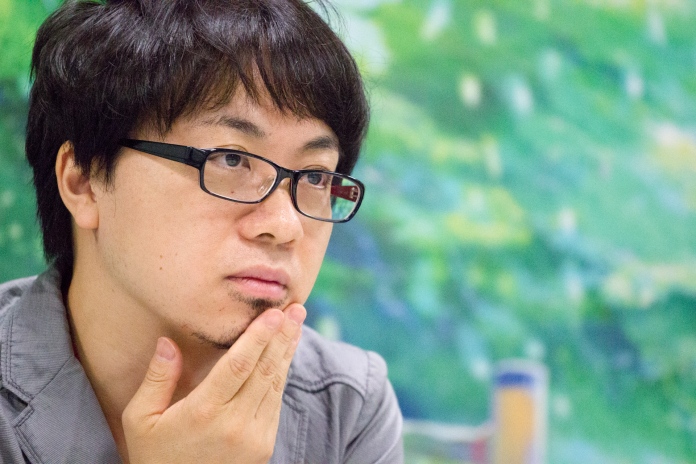 On the strength of his latest animated venture, Your Name, Japanese film-maker Makoto Shinkai is widely being hailed as the next Hayao Miyazaki. Yet, while comparisons to the Ghibli genius are undoubtedly flattering and deserved, Your Name remains a matchless cinematic wonder without the Miyazaki affiliation. The genre blending story follows teenagers Taki and Mitsuha, who have never previously met but psychically connect in their dreams; a phenomenon which coincides with the passing of a comet but may or may not be related.

Your Name melds sci-fi with comedy/romance and is a stirring, poignant and visually sumptuous voyage through confused teen emotions and multiple universes. HeyUGuys recently met with its writer/director, Makoto Shinkai, in central London to discuss his creative processes, views on mainstream sci-fi, the modern phenomena of multiverses/ alternative realities and the string theory, which all inform Your Name’s psychedelic love story.

Your Name interestingly mixes teen comedy/romance with science fiction, what came first, was it the love story or the entwining comet/body swap plot?

I wanted to create the story of a boy and a girl destined to meet… but not yet. It’s about having the knowledge that they might meet tomorrow but they also might not meet for a very long time. I thought that might appeal to the younger generation who might think “oh that’s me”. After creating the characters, I wondered what the best way would be to get them together and then I thought of body swapping.

Did you draw on any specific experiences from your own teenage years when writing Your Name?

Yes. The girl character living in the countryside who wants to go to Tokyo, she was me as a teenager. Also, the character who has the father who is running a construction company and tells his friends that he will stay in this town forever and get old here, again, that was me because my parents were running a construction company. There was always that pressure on me to take over the business one day but I wanted to go to Tokyo so those conflicting emotions in there were mine.

The editing, story and general nature of Your Name is fast paced and frenetic. Do you think this reflects how young people are communicating and consuming information now at a faster rate now due, possibly due to social media?

I really wanted to make it faster because I had loads of stories to tell but I wanted to keep them individually short. I didn’t want to make the film too long because young people who use social media are used to consuming art and information really quickly and doing more than two things at the same time. I really don’t want younger viewers to get bored so yes, I was really, really conscious of that.

Your Name feels very fresh in terms of concept. Do you feel that mainstream cinema has started to embrace and become more open to intelligent ideas now or is it still stuck in structural formulas and convention?

Now you’ve got me thinking. I’m not sure how to define “mainstream” in Japan so might have to ask these guys from Toho [referring to the producers on the other side of the room]. In Hollywood, sci-fi is pretty mainstream but can be intelligent like Christopher Nolan’s Interstellar but in Japan, Ghibli is fantasy but not sci-fi. I think Your Name is very different from recent hit movies in Japan because it’s not just sci-fi. It is also different from recent sci-fi fantasy films because it incorporates timeless love story elements that have always been present in manga.

Your Name also incorporates elements that have started to find a loose basis in reality; multiverses, alternative realities spawned from the Hadron Collider/ Higgs Boson experiments and conspiracy theories like the Mandela Effect. Did you do much research into these areas to inform the story?

I didn’t specifically research these areas but I do like reading about them. I wasn’t that good at maths or physics at school but I love reading about the secrets and mysteries of the universe so I read quite a lot about physics and space for fun. The story in Your Name features elements that could be loosely tied to these and it is also about the string theory which replaces particle physics with one dimensional objects.

Most of your work has been sci-fi romance animation. Would you ever consider working within another genre or live action?

I always start with a blank sheet of paper. Personally, I have always wanted to make a genuine, authentic hard sci-fi based on very scientific facts because generally I love watching movies and reading novels like that. Sci-fi isn’t really popular in Japan so when this film came out we were hoping it wouldn’t be referred to as sci-fi too much because that would put some people off. If I could, I would love to make a hard sci-fi movie but, having said that, I really haven’t decided anything just yet.

Do you feel that modern audiences would embrace Your Name more if it was marketed more as a romantic comedy?

I have no idea (laughs)! What do you think? Let us know.

Your films are very dreamy. Do you find dreams and romanticising concepts play an important part in your creative process or is it more synthetic?

My creative process is pretty much professional. It is not about dreams. I don’t really dream my stories. It’s more like puzzles that I write but it is important for me to find an idea and write a story that nobody has written before or will ever write. Something that is genuinely original and mine. I really hope Your Name is something like that. Yes, I do dream about it but that’s not how I write my stories, if that makes sense?

Your Name is released on November 18th. You can read our review of the film here.