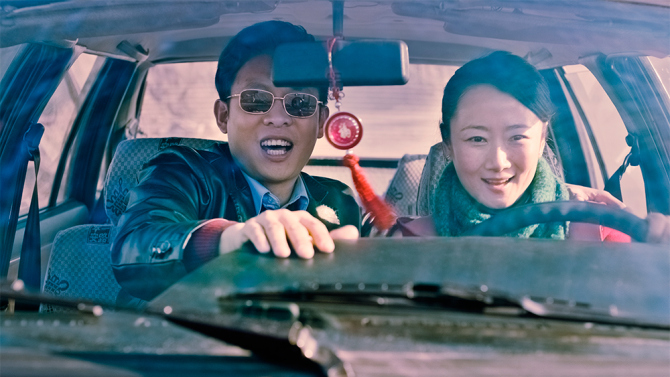 Zhangke Jia has already walked countless red carpets, picking up the Golden Lion in Venice for Still Life and garnering awards for his more recent A Touch of Sin. Regular collaborator Tao Zhao starred in both those films and appears in Mountains May Depart, giving Cate Blanchett stiff competition for the Best Actress award here in Cannes.

Zhao plays Tao and we see her performing to the Pet Shop Boys’ Go West at New Year, it’s 1999 and go west is exactly what China is about to do. Tao has two suitors, Jinsheng (Yi Zhang) and Liang (Jingdong Liang), the former a wheeler dealer who has embraced westernisation to the extent that he wants to name his son Dollar, the latter a miner.

When Tao chooses to marry Jinsheng, the lovelorn Liang ups sticks. We then move on to part two, set in 2014, the most successful of the three sections. It’s New Year again, but this time the performing Chinese dragons have been replaced by a US-style marching band. Tao lives alone, her son, Dollar, attends an international school and lives with his dad and step mum.

When he returns for his grandfather’s funeral, we see a privileged and spoilt child who barely speaks Mandarin and hardly knows his mother. In the short time they have together, Tao strives to forge a relationship with Dollar. Before he heads off to a new life in Australia, Tao hands him a set of her house keys, stating that he will always have a home with her.

The third part is set in 2025 and this part of the film is its downfall. The near future is nicely captured: there are no driverless cars or google glasses, no odd interiors or apocalyptic landscapes; there’s just some nice-looking technology and a slightly crumbling nature. Dollar (Zijang Dong) is now a grown man trying to escape his father and learn his native language. He falls for his teacher Mia (Sylvia Chang), but Dollar’s Oedipal relationship with Mia seems too forced. Also, Dollar has a pretty strong Chinese accent for someone who can’t speak the language.

What does work well are the threads running throughout the film, though not necessarily in every section. We see a puppy grow into an old pet, a sweater, a boy carrying a traditional weapon, a set of keys. These threads form a connection between the years, but show that it is neither constant nor resistant to change.

There are also beautiful scenes, such as ice being blown up on a river or the bizarre sight of a single-pilot plane crashing and bursting into flames. No explanation is given; it is simply a beautiful and terrible image.

Jia has created a brilliant view of China’s westernisation and the world’s globalisation, often parodied through the character of Jingsheng. But it is Tao Zhao who towers here as the lonely and lovely Tao, a Hermione waiting for her lost child’s return.