Home Features Beyond the Fl... 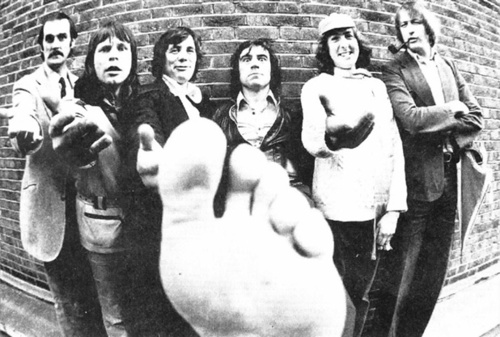 The announcement that the remaining members of Monty Python’s Flying Circus were going to reunite last year took us all by surprise, and rightly so. For comedy nerds this was our ‘Free as a Bird’ moment, this is the reunion declared impossible (as indeed a true reunion is, with the death of Graham Chapman in 1989), and not since 1998 in Aspen (when Chapman’s ashes were kicked across the stage) have they appeared together on stage.

Indeed even the last series of the television show did not include a full complement of Pythons, jettisoning the Flying Circus and John Cleese who was already keen to do other things. Thankfully the mercurial genius which inspired such beautiful lunacy survived the small screen and the team would go on to jump in and out of each other’s projects as they each grew as writers, performers  and directors. Indeed they are scheduled to appear in Terry Jones’ next film Absolutely Anything along with Robin Williams.

Gathered here are ten of the finest moments from the team after the Flying Circus was grounded. They may not all match the comedic heights reached by the very best of the show but each have a distinct whiff of Python about them. This is just a taster of what makes Python timeless, you could fill a week’s worth of features with lists of their best moments.

Enemies of the mundane, champions of the very silly indeed, they railed against the establishment and then became part of it, influencing thousands of comedians and worming their way into the public consciousness for ever more. And they’re coming back…

To kick us off here is a, perhaps rightly, forgotten mid-80s farce starring John Cleese’s moustache and a gaggle of UK screen favourites. It did however throw up a very nice little aside during the research. Check below for some more full frontal nudity.

At first glance this may look like a big screen outing for Basil Fawlty, and it cannot be denied that the same self-important frustration is also at the heart of Cleese’s character here. Clockwise is a very old-fashioned beast, not without its curious English charms and foibles, and naturally Cleese makes the very best of a patchwork script to create a film which was greatly enjoyed in the mid 80s before being consigned to the doldrums along with Burn, Hollywood Burn, Splitting Heirs and Nuns on the Run.

Crafting your film around a very punctual headmaster who is late for a headmaster’s conference is a touch obvious, however Cleese’s embittered stiff upper loony saves the day and makes the film watchable. Here’s the opening of the film, which is an utterly terrifying and very accurate depiction of schools in the 80s. Yikes.

There is also a moment which follows Stimpson’s remote detention giving, one which caused a few modest titters whenever this film was shown in school. There appears, out of nowhere, a streaker. This causes the entire school to erupt in adolescent giggles and so infuriates Stimpson. Robert Wilkinson was that streaker, he wrote about his brief experience on the film here which includes a choice quip from Cleese. Have a watch of the streaking incident below.

New Poster and Teaser Trailer for Absolutely Anything, with Simon Pegg & The Pythons

0
Spycies has all the markings of a top notch kids film, after...